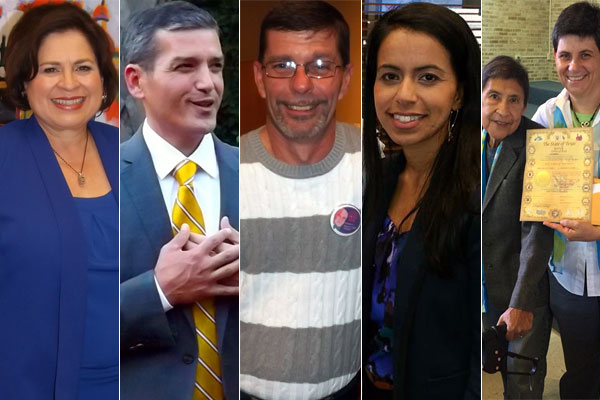 Leticia Van De Putte and Mike Villarreal wanted to be mayor but it wasn't in the cards. David Ewell was fired from his job at the San Antonio AIDS Foundation. Kiran Bains was hired to run the city's Office of Diversity and Inclusion. Nickie Valdez and Deb Myers at Lutheran Church of the Good Shepherd with their marriage license.

1) San Antonio celebrates marriage equality
There was joyous celebration in the Alamo City on June 26, the day the Supreme Court made marriage equality a reality. There were church nuptuals and downtown wedding parties jammed the halls of the Bexar County Courthouse. There was a rally in Main Plaza and a block party on the Main Avenue Strip all echoing observances across the US on that day.

3) Taylor elected mayor
Ivy R. Taylor was elected mayor with a coalition that included North Side conservatives, anti-gay Christian groups and East Siders. The big losers in this election were most notably former State Senator Leticia Van de Putte who, fresh off a loss in the race for lieutenant governor, ran against Taylor in the general election, and former State Rep. Mike Villarreal who lost to Van De Putte and Taylor in the primary.

5) SAAF board fires executive director
The board of directors of the San Antonio AIDS Foundation, under the leadership of President Anne Marie Simmons, fired Executive Director David Ewell. The termination was effective on April 20. Ewell’s firing created a backlash, especially after Interim Executive Director Jack Downey’s leadership proved unpopular with some employees, clients and SAAF supporters. Cynthia Nelson of Houston has been hired to replace Ewell.

9) Study: 4% of SA population is LGBT
A new Gallup study released on March 20 shows the LGBT population of greater San Antonio is 4 percent. That number falls somewhere in the middle with San Francisco coming in the highest at 6.2 percent and Birmingham, Alabama the lowest at 2.6 percent.

2015 in Review: Honorable and Dishonorable Mentions

A select month-by-month recap of stories about our community reported here and elsewhere in 2015. JANUARY Cornyation's Robert Rehm dies...