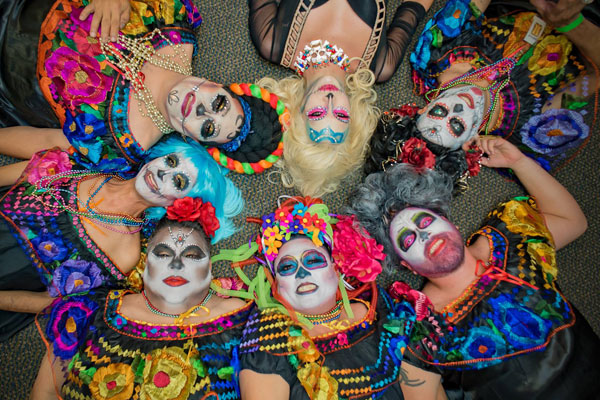 Folkloric drag queens from a past edition of Fiesta Cornyation. (Photo: Facebook)

Due to the COVID pandemic, Fiesta San Antonio events were mostly cancelled the past two years. This year, Fiesta returns with a full roster of festivities including those sponsored by organizations in the LGBTQ community.

Below is a list of events organized to help raise funds for queer nonprofits. Guests can opt to pay General Admission or extra for a “VIP Experience.” In either case there will be food, libations and plenty of entertainment. Ten restaurants including Tio Pelon’s Salsita, Toro Kitchen, Magnolia Pancake Haus, and the SAAF Kitchen will provide tasty treats for partygoers. All proceeds benefit the San Antonio AIDS Foundation. Due to COVID the event will be a bit different this year. instead of a traditional chili competition, the Bonham will be bringing in a previous winner to give out chili samples.

There will be live music with The Jimmy Spacek Band Featuring RB Blackstone. The Bonham Babes will be doing special numbers to honor some of the Chili Queens VIPs for all their help and accomplishments. The night finishes off with Fiesta’s tackiest competition, giving out the Woochie award for the Tackiest Queen. April 5 to 7 – Fiesta Cornyation
Fiesta Cornyation has been proclaimed by its organizers as Fiesta’s “raunchiest, cheapest event with a purpose.”  This year’s show, The Court Of Frenetic Frantic Kingdoms, will be reigned over by “His Royal Heinous” King Anchovy LV, Jesse Mata.

Fiesta Cornyation, April 5 to 7 at 7 p.m. and 10 p.m. at the Charline McCombs Empire Theatre, 226 N. St. Marys Street. Tickets are available at the Empire/Majestic Box Office and on Ticketmaster.com. The party will be held at the Betty Kelso Center inside the San Antonio Botanical Garden. Guests will enjoy cocktails and appetizers along with a full roster of entertainment including the e7 Band, DJ Rook, singer/songwriter Laura Marie, DFNTLY Entertainment, and the Grupo Folklorico de Bendiciones Dance Team.

Commentary: Texas’ persecution of transgender kids and their families is fundamentally wrong

Ricardo Martinez is CEO of Equality Texas Over the last two years in Texas, in and outside of the Capitol,...