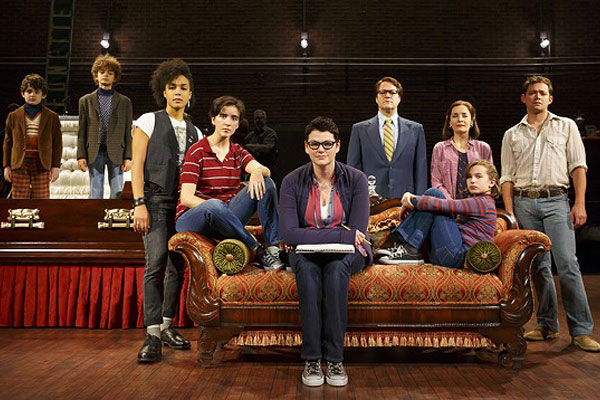 The cast of "Fun Home." (Photos by Joan Marcus)

Lesbian author and cartoonist Alison Bechdel is a true gem of the LGBTQ community. Since coming out in 1980, she has advocated for LGBTQ equality and self-acceptance in her own, truly unique way.

A series of analepses of childhood, Fun Home presents intimate details of her family’s quirky demeanor, her attraction to other women, and the conundrum of her dynamic, distant dad (Bruce Bechdel) who has some serious skeletons in his own perfectly organized closet. In 2013, the memoir was adapted into a five-time Tony-winning musical by Lisa Kron and Jeanine Tesori. Keeping the original title, Fun Home is centered on Alison’s relationship with her brilliant but tyrannical father Bruce, investigating his obsessive character and the events leading to his death.

Revealed as a closeted homosexual, Bruce lashes out at Alison when she begins exhibiting similar tendencies — ordering her to wear dresses and to subdue her boyish antics. In the production, Alison is depicted at three different ages, small, medium and full-fledged adult lesbian. Adult Alison peers over her own shoulders, watching the events of her life unfold, and re-unfold, adding more and more context to each moment. Filled with genius musical numbers ranging from melancholy to exuberance, Fun Home is a riveting tale of the strife of self-identity and acceptance — and a sometimes-heartbreaking reminder of how far we’ve come.

The San Antonio Gender Association will recall the life of Kenne McFadden on August 8, which would have been her...