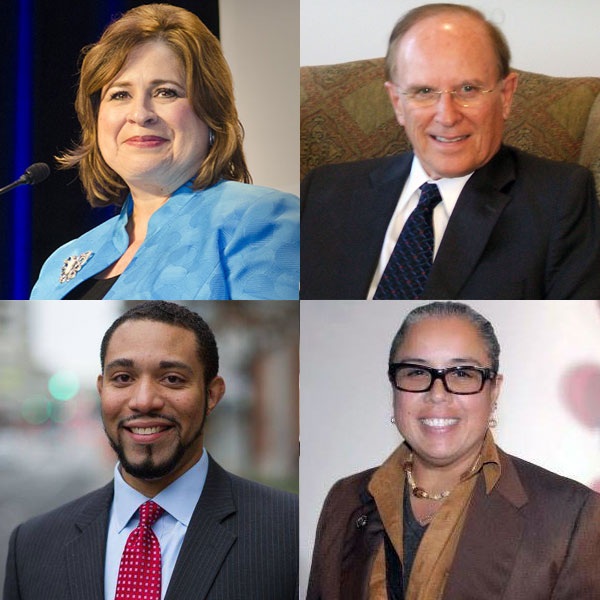 Wins and losses for hometown allies: State Sen. Leticia Van de Putte won Bexar County but lost the statewide race for Lt. Governor. Nelson Wolff retained his seat as County Judge. Tommy Calvert's win as County Commissioner Pct. 4 makes him the first black person to hold that post. Rosie Gonzalez, the only out candidate on the Democratic ticket, lost her run for County Court at Law No. 13. (Courtesy photos.)

The 2014 midterm elections were essentially a repeat of the 2010 midterms with far worse consequences for Democrats and a progressive agenda.

Last night’s GOP sweep resulted in Republican control of the U.S. Senate, the largest Republican majority in the U.S. House in decades and surprising Republican gubernatorial victories in royal blue states like Maryland, Massachusetts and Illinois. Rightly or wrongly, the GOP sweep was a referendum on President Obama and his low approval ratings despite Republican obstructionism in Congress.

In Texas, Republicans once again swept all statewide offices by even wider margins, despite the promising Democratic candidacies of Wendy Davis for governor and our own Leticia Van De Putte for lieutenant governor.

Van De Putte was the only Democratic statewide candidate who won her home county of Bexar. Texas Democrats lost a U.S. House seat when first-term Democrat Pete Gallego narrowly lost re-election to Republican Will Hurd in House District 23. Wendy Davis’ state senate seat in the Fort Worth area also flipped to the GOP, giving Republicans an even larger majority in the state senate.

Winners and losers in local races

In Bexar County, voter turnout was about 32 percent of registered voters, a slightly lower percentage than 2010, and which mirrored statewide turnout overall. However, Democrats almost tied Republicans in straight party voting in Bexar compared to Republicans winning the straight party vote by 7.5 percent in 2010.

Despite better Democratic performance at the polls, incumbent Democratic State Representative for District 117, Philip Cortez, was defeated by Republican Rick Galindo by a decisive margin in that swing district. All Democratic judicial candidates went down to defeat, including several incumbents. The only exception was incumbent County Court at Law No. 3 Judge David Rodriguez, who narrowly won re-election.

Even with strong community support, Rosie Gonzalez, the only out candidate on the Democratic ticket, lost her judicial race for County Court at Law No. 13.

There was also a special election for Mayor Ivy Taylor’s replacement for City Council, District 2. Alan Warrick and the incumbent District 2 appointee, Keith Toney, will meet in a runoff as neither garnered more than 50 percent of the vote in a race with five candidates.

Getting out the LGBT vote in S.A.

Kudos go to a group of new young LGBT leaders for their yeoman efforts in turning out the LGBT vote in San Antonio. Young people like Carlos Soto, Jorge Estevez, Joe Tanasi and others spent countless hours organizing a #SAComeOut2Vote event on the Main Avenue Strip followed by a march to the polls on the Sunday of early voting.

Maria Salazar collected photos of LGBT people who voted early and created a massive collage of these photos shaped in the form of a heart as part of the promotion of her “Voting Is Hot” campaign which went viral on social media.

These new leaders are to be commended for their tireless efforts and enthusiasm in turning out the LGBT vote, despite the trouncing Democrats took at the polls in Bexar County and Texas. This also bodes well for a new generation of political leadership in San Antonio’s LGBT community.

What now for LGBT equality?

So, what will the impact of these elections be on the LGBT equality movement? Well, to borrow the title of a song by country singer Loretta Lynn, “We’ve Come A Long Way, Baby” since 2010! Before the GOP sweep in the 2010 elections, Don’t Ask Don’t Tell (DADT) was still the law of the land and only 5 states and the District of Columbia had legalized same-sex marriage.

DADT was repealed shortly thereafter by the lame duck Democratic Congress and, thanks especially to the 2013 United States Supreme Court decision in United States v. Windsor and a plethora of court decisions that followed, the pace of legalizing same-sex marriage has accelerated dramatically across the land. Marriage equality is now legal in a majority of states, 32 to be exact.

Moreover, after the Windsor decision, the Obama administration ordered all federal agencies to grant federal benefits to married same-gender couples, even if they reside in states where marriage equality is not yet recognized. Unfortunately, the administration is unable to provide Social Security survivor and certain veteran’s benefits to same-sex married couples living in states without marriage equality because of provisions in federal law that require an act of Congress to change.

Now that Republicans will have firm control of both houses of Congress, these changes are unlikely to occur any time soon. However, litigation has already begun in the courts to challenge this inequity in the federal law.

Marriage equality is well on its way to becoming a reality in all 50 states thanks to recent court decisions and despite any shenanigans Republicans try to pull in Congress to roll back the clock. Yet, there is still much more left to do to advance equality for all LGBT people.

Congress still has not passed the Employment Non-Discrimination Act (ENDA) after it was first introduced 20 years ago. It is still perfectly legal in 29 states to fire someone for being gay and in 32 or more states for being transgender. Also, the repeal of DADT does not include protections for transgender service members in the military.

Texas is one of those states that has yet to pass an ENDA to give protections to LGBT people in the workplace. With continuing Republican majorities in the State House and Senate, do not look for any statewide ENDA to become law in the foreseeable future.

With radical homophobic zealot Dan Patrick as Lieutenant Governor and a larger GOP majority in the state senate, nothing can prevent anti-LGBT legislation from passing and being signed into law by Governor Greg Abbott. Also, transgender people in Texas are still not legally protected under the state’s hate crimes bill that passed in 2001, not to mention the many other obstacles transgender people face in this state such as gender markers on driver’s licenses.

The Republican sweep in Tuesday’s elections was daunting and depressing, to be sure. LGBT Texans now can only look to the courts for any hope of advancing a pro-equality agenda in this country, including marriage equality in this state. Hopes for an electoral shift in this state grew dimmer last night. As long as only one-third of registered voters in Texas show up to vote in mid-term elections, this will continue to be a deep red state.

Now is not the time to wallow in despair. As Wendy Davis said in her concession speech last night, “Being disappointed is OK, but being discouraged is not.” The fight for full equality continues and it begins here at home with more LGBT people becoming involved in the political process and engaged in a grass roots effort to register, educate and mobilize more LGBT people and their allies to vote.

Dan Graney is active in Democratic Party politics. He has served as co-chair of the Stonewall Democrats of San Antonio and CAUSA (Community Alliance for a United San Antonio). He has previously written for QSanAntonio and the Dallas Voice.

As the crowd packed into the Museo Alameda Sunday afternoon, anticipation was high for local designer Samantha Plasencia's show. Some...