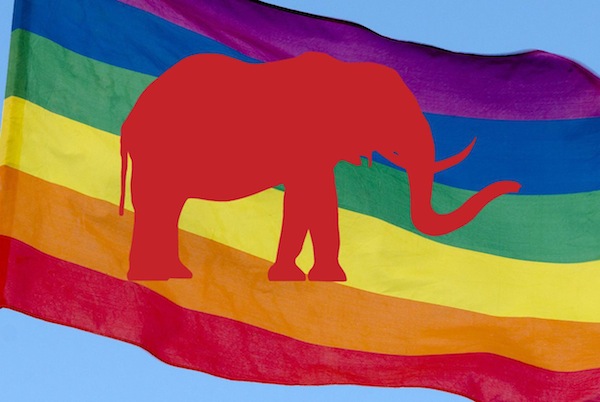 By Ross Ramsey, The Texas Tribune

Texas Republican leaders have decided once again not to allow the party’s biggest LGBT group — the Log Cabin Republicans — to operate a booth at the state convention.

The reality is, Republicans are old.

Some Democrats are old, too. But on average, the older the Texan, the more likely they’re conservative. Also, male. And white.

That’s a fact, not a judgment. Not every Republican fits that description — not by a long shot.

Still, a far-thinking Republican might ponder that situation and wonder about the future. Who’s available to replace the old white guys as they die off?

Young Texans. And Hispanic Texans. Who are both loath to listen to a party that seems intent on ignoring the issues that might pull them into the tent.

Start with Hispanics. Republicans in Texas say they’re making a concerted effort to attract the fastest-growing segment of the state’s population to the party. At the same time, polls regularly show conservative voters’ top concerns are immigration and border security. Prominent members of the party have built their campaigns around fears of immigrants in general and Hispanic immigrants in particular.

That sets up a dissonance that echoes through state politics. Today, if you’re a Hispanic member of the Texas Legislature, you’re either a Democrat or your name is J.M. Lozano. He’s the Kingsville lawmaker who was elected to the Texas House as a Democrat in 2010 and then switched parties less than two years later. With Larry Gonzales of Round Rock deciding not to seek re-election and last month’s primary defeat of Jason Villalba of Dallas, Lozano — assuming he wins re-election in November — will be the lone Hispanic Republican in the 181-member Texas Legislature.

It’s not hard to diagnose the problem. While some Republicans have been working to attract Hispanics to the party, others have been pursuing policies that many of those same Hispanic voters find threatening. A vote on a strict “sanctuary cities” bill last year nearly brought a small group of lawmakers to blows.

When it comes to LGBT issues, the party takes a similar approach. The state’s electorate is divided along party lines, but also along age lines. Before the U.S. Supreme Court ruled same-sex marriage constitutional, younger Texans were more likely to approve of those unions. In an October 2014 University of Texas/Texas Tribune Poll, 50 percent of voters under age 30 approved of same-sex marriage, while only a third of voters over 45 did.

In a UT/TT Poll in June of last year, public opinion had shifted, but the age of the voters still revealed different attitudes. While 74 percent of the under-30 voters said same-sex couples should be allowed to marry, only 50 percent of voters aged 45 to 64 said so, and only 42 percent of those 65 or older agreed.

By not granting the Log Cabin Republicans a booth, the State Republican Executive Committee is sticking with the older voters who have an outsized voice in GOP primaries and in the state party’s policy. But it’s a voice that doesn’t harmonize with the people the party will rely on in the future.

Demographics are aligned against an organization that can’t replace its members. In Texas, the replacements are here. They’re visible. They’re young. They’re Hispanic. And on some issues that are prominent in current civic debate, their views are identifiably different from those of the people they’re going to succeed.

A Log Cabin Republican booth, if there was one at the state convention, might be the loneliest spot in the whole building. Nobody would notice that, though. The way to really underline it, to bring it to everyone’s attention, is to vote to keep them outside.

That makes the older voters in the GOP happy. What about the kids who’ll replace them?

Fiesta Youth's biggest fundraiser of the year, Midnight in the Garden of Good and Evil, will mark its fourth year...