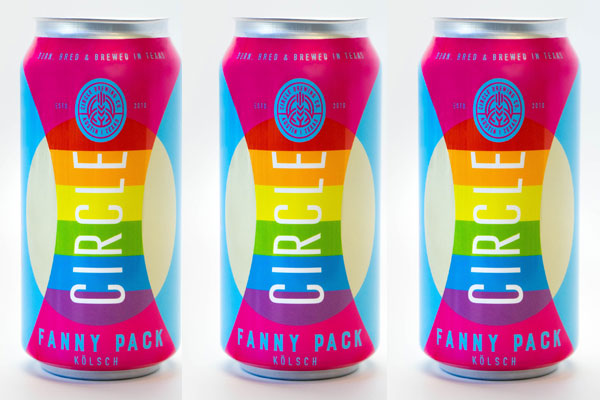 Circle Brewing Company of Austin and Equality Texas are teaming up for the launch of a beer in a rainbow colored can during a June 7 party at the Friendly Spot Ice House.

According to the press release, the label on the can has been designed with rainbow flag colors in order to “take a positive stance against discrimination towards LGBTQ [people] and creates a celebration of the progress Equality Texas has made through their work to create a Texas where all are valued.”

Starting this month, Circle Brewing will donate $1 to Equality Texas for every case of Fanny Pack Kolsch sold. The beer will be sold in major grocery stores, liquor stores and convenience stores throughout Central Texas.

“Equality Texas is excited to partner with Circle Brewing Co. for the summer release of Fanny Pack,” said Samantha Smoot, interim executive director of Equality Texas. “This partnership celebrates the LGBTQ community, Pride season, and the spirit of inclusion, and we lift our glass to Circle Brewing Co. for their support for equal rights for all.”

“Fanny Pack has always been a fun and lively beer for us in the market and we were so thrilled to work with an amazing organization that is fighting for equality,” said Ben Sabel, co-owner of Circle Brewing.

Originally published in the San Antonio Current. Mayoral aspirant Greg Brockhouse seems to be holding out hope that Chick-Fil-A will...