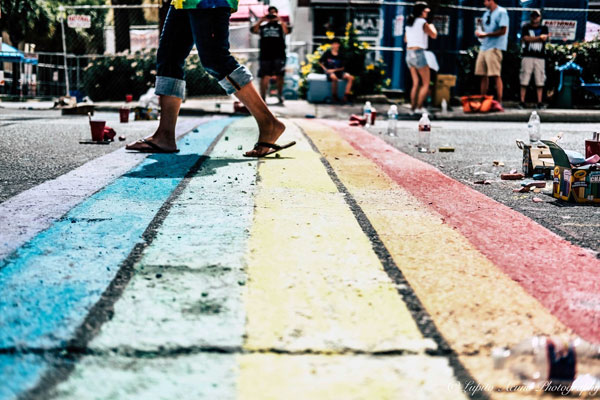 Members of the San Antonio City Council’s Governance committee on August 2 voted to approve the installation of rainbow crosswalks at the corner of North Main and East Evergreen avenues.

“The measure is approved and will launch as a pilot program and report back to transportation committee six months after installation. We hope to have [the crosswalks] installed by the new year,” District 1 City Councilman Roberto C. Treviño told Out In SA.

Last June, Treviño, submitted a Council Consideration Request seeking the council’s approval for the crosswalks. Once the pilot program is completed, the crosswalks must still face a vote by the full City Council before they can become a permanent fixture.

Before the crosswalks can be installed, private funds must be raised to offset the difference in the cost of installing a traditional white-striped crosswalk which is $20,000. The rainbow crosswalks will cost $68,000.

News of the Governance Committee’s approval was met with celebratory comments on social media. However, the cost of installation caught many in the LGBT community by surprise.

“Shocked that the cost to paint a crosswalk is $68,000. Even a normal one would be $20K . . . Starting to think this otherwise simple request to the City of San Antonio underscores a much larger problem. Are we paying contractors WAY too much?” one Facebook post read.

Indeed, the price tag for the crosswalks may prompt some City Council members to think twice before they vote to approve them.

According to the San Antonio Express-News, District 10 City Councilman Clayton Perry is polling his constituents, among the most conservative in the city, via a survey.

District 6 Councilman Greg Brockhouse told the Express-News, “We have so many more pressing issues in our city than painting crosswalks. We need to focus on the basic needs and core requirements now. Instead of painting crosswalks, we should be building crosswalks around school zones, hiring more police officers and fixing our crumbling infrastructure.”

Brockhouse said he would be open to letting “any group meeting criteria established by the council” to create their own crosswalks if they paid for installation and maintenance without using taxpayer money. On July 1, a group of volunteers painted a set of rainbow crosswalks in chalk on Main and Evergreen avenues. (Photo by Juilan P. Ledezma)

On July 1, the day of the Pride festival and parade, a group of volunteers organized by attorney Rosie Gonzalez painted a set of rainbow crosswalks in chalk on Main and Evergreen at an event dubbed Chalk It Up.

Upon hearing of the Governance Committee’s approval, Gonzalez told Out In SA she would help lead effort to raise the needed funds. “Whatever we need to do to raise the $48,000, we will do,” she said. “I’m confident because our city has a long list of committed LGBT community members and allies who will step forward to help with our efforts.”

Councilman Treviño said he will meet next week with Gonzalez and Robert Salcido, who is on the boards of the Pride Center and the local LGBT LULAC chapter, to “discuss the design scope and fundraising.”