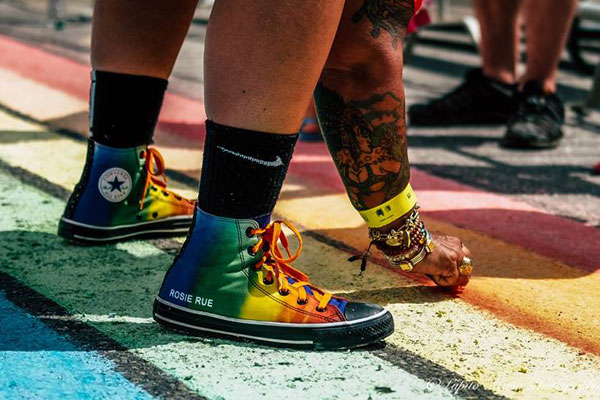 Last July, a group of volunteers painted a set of rainbow crosswalks in chalk on Main and Evergreen. (Photo by Lupito Acuña Photography)

In a unanimous vote, the San Antonio City Council voted to accept $19,832 in donations from the LGBT community and its allies to help defray the cost of installing a rainbow crosswalk at the corner of Main and Evergreen in the heart of San Antonio’s LGBT business district.

The donations were presented to the City Council by officials from Pride San Antonio.

The vote clears the way for the city’s Transportation and Capital Improvements Department to begin the installation of the crosswalk on June 23, just ahead of the Pride Bigger Than Texas Parade on June 30.

The plan to create the crosswalk originated in the summer of 2017 when Councilman Roberto C. Treviño submitted a Council Consideration Request which the City’s Council’s Governance Committee approved as a pilot program.

The price tag for the crosswalk is $32,500. The amount raised by the LGBT community represents the additional cost of painting a rainbow design versus a white-striped crosswalk.

Raising funds for the project has been a eight-month effort which got off to a slow start. The campaign was jump-started in April when Treviño unveiled a Fiesta medal he had designed and which was sold to help raise some of the needed money.

Approximately $9,500 was raised from the sale of medals thanks to efforts by Randy Cuniff of Texas Heat Investments who owns four businesses on the Main Avenue Strip. Treviño received additional donations from local LGBT businessman Paul Boskind ($1000), the Alamo Area Resource Center ($2000), PFLAG SA ($500) and Tito’s Vodka ($5000), among others.

Before the final vote was taken, District 6 Councilman Greg Brockhouse wanted to add an amendment which would have allowed churches and other groups to originate their own creative crosswalks under the same program.

City Manager Sheryl Sculley interjected saying that as a pilot project, the rainbow crosswalk would come under review in six months. Mayor Ron Nirenberg put Brockhouse’s amendment up for consideration by the council which struck it down in a vote of 8 to 2.

For Treviño, who has championed the project from the start, the vote marked the end of a long road to making the rainbow crosswalk a reality. In his comments at the City Council meeting he said, “The installation of this symbol in the heart of the LGBTQ community shows we are a city with a warm embrace of all of its residents.”

Planned Parenthood believes everyone deserves high-quality, compassionate health care that's appropriate for your needs and concerns — no matter your...