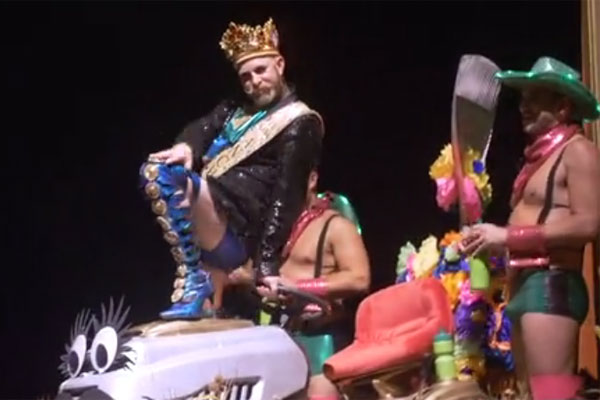 Filmmaker David Sims’ 20-minute documentary about Fiesta Cornyation, which follows the behind-the scenes staging of the show in 2017, will be screened at the San Antonio Film Festival on August 3 as part of a block of short films under the category Hometown Heroes.

Cornyation, the Short Film was completed in September 2017. It chronicles the origins of the bawdy stage show and it’s roots in the community.

The film features interviews with founder Ray Chavez and members of the Cornyation family including past and present Kings Anchovy. It received a premier screening in March at Brick at Blue Star.

Cornyation is one of the most popular events held during Fiesta San Antonio, typically selling out weeks ahead of time. It has donated over $3 million to local charities over its life as a nonprofit organization.

Sims says the short film sparked his interest in creating a full-length feature.

“After directing the short film last year I felt like 20 minutes wasn’t enough to fully do justice to the history of Cornyation and the Cornyation community,” Sims told Out In SA. “We’re proud of the short film, but excited to really unpack the Cornyation story and profile the dedication of many of the artists, entrepreneurs and truly passionate and talented individuals that work tirelessly to pull Cornyation off year after year.”

During this year’s Fiesta San Antonio, Sims and his team captured additional footage during the run of Cornyation’s 2018 edition, The Court Of Frenetic Frantic Kingdoms, which hit the stage for six performances last April. The longer version of the film is now in the editing process and should be ready by next spring, according to Sims.

David Sims shooting footage for his Cornyation film at the King Anchovy Coming Out Party. (Photo by Sam Sanchez)

Sims, who was born in the UK, has been making films since he was 11 years old. He has shot four feature films, scores of short films and over 50 commercials. His film, #prayfor, which is available on Shorts TV, earned him the 2017 award for Best Filmmaker at the San Antonio Film Festival. Another of his films, Cavern, was part of the 2016 Cannes Film Festival Short Film Corner.

This year, the San Antonio Film Festival celebrates it’s 23rd anniversary with the screening of more than 100 films from August 1 through 5. The festival brings together scores of new and original features from across the country. This year’s line-up consists of 31 full-length features and dozens of short films.

‘Cornyation, the Short Film’ will be screened at the San Antonio Film Festival as part of Hometown Heros, a block of short films by San Antonio filmmakers, on Friday, Aug. 3 at 7 p.m., Tobin Center for the Performing Arts, 100 Auditorium Circle, San Antonio, Texas 78205. Ticket information at this link.

Bihl Haus Arts is opening a new exhibit on July 21 titled, 10,000 Years of Love and Resistance: A Celebration...