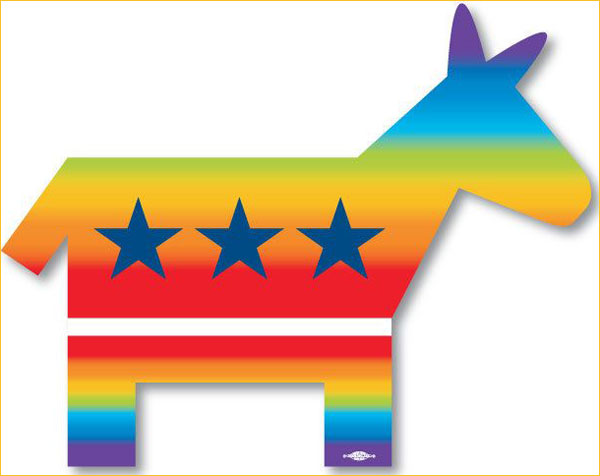 Most of us are still reeling over the unthinkable – a Donald Trump presidency. We are in a state of grief, not so much because the Republicans under Trump will have complete power in Washington but the bigotry which was espoused by Trump and many of his followers has now unveiled itself as never before. A few days after the presidential election, vandals defaced a car in a gated complex in San Antonio with graffiti that reads: “It’s over faggots.” (Photo: Facebook)

What was lurking beneath the surface is now out in the open and many minorities and other groups, including Latinos, African-Americans, Muslims, women and LGBT people are fearful for their futures, if not their lives. There is much work for us to do if we want to truly “take our country back” and move forward for diversity and equality.

As disappointing and gut-wrenching as this result is, there were indeed silver linings to the very dark storm clouds of this election. First and foremost, the fact remains that while Donald Trump won the most electoral votes, Hillary Clinton won the national popular vote.

The latest tally has Clinton winning the popular vote by more than 574,000 or way more than half a million votes. Based on that alone, the Republicans cannot claim any sort of “mandate” for the ugly, reactionary agenda Trump-Pence represent. As Hillary Texas campaign chairman Garry Mauro said, “Trump will forever be a president who did not have the majority of Americans behind him the day he walked into office.”

In Texas, we have even more reason to be proud. We Democrats improved our performance statewide by 600,000 votes over 2012. Statewide turnout in this election was 59.1 percent which exceeds the 2012 turnout of 58.5 percent and is slightly below the 59.5 percent turnout of 2008. Clinton only lost by a little over 9 percent while Barack Obama lost by 16 points in 2012 and 12 points in 2008. It is significant that in all but one of the most populous counties in Texas – Tarrant (Fort Worth) – Clinton won by large margins (e.g., Bexar, Dallas, El Paso, Harris, Travis).

In Bexar County, Clinton beat Trump 54 percent to 40 percent and Democrats were victorious in all countywide races. This was undoubtedly due in large part by Democrats outvoting Republicans by straight party ticket. The Stonewall Democrats of San Antonio should be very proud of the fact that 32 of our 38 endorsed candidates won in Bexar County. All of our endorsed judicial candidates (except for our 2 endorsed statewide judicial candidates) were elected including Irene Rios for 4th Court of Appeals. Rios won her 32-county race 52 percent to 48 percent and we now will have a Democratic majority on the 4th Court of Appeals once again.

Congratulations also to Javier Salazar, who eked out a narrow victory (a little over 4,000 votes – less than 1 percent) over incumbent Republican Susan Pamerleau in the Bexar County Sheriff’s race.

Unfortunately, Democrats did lose two important races. In the 23rd Congressional District, Pete Gallego lost by less than 2 points district-wide to incumbent Republican Will Hurd. (Gallego lost by a huge margin in Bexar County.) State Board of Education District 5 candidate Rebecca Bell-Metereau, lost to incumbent Republican Ken Mercer district-wide by 4 points (and by a larger margin in Bexar County). A young woman wearing a rainbow flag is among the protestors at an anti-Trump rally which was held in Alamo Plaza on November 11. (Video capture via KSAT-TV)

As we move forward, the LGBT and allied communities will need to be vigilant and more engaged than ever, especially as we look to the ugly, nasty bathroom bathroom legislation that we will be facing in the State Legislature early next year.

Make no mistake about it – the next two to four years will be daunting and challenging for us – so we must get involved. We need each other now more than ever.

The community is invited to join the Stonewall Democrats of San Antonio for their next meeting on Monday, November 21, 6:30 p.m. at Luby’s Cafeteria Fiesta Room, 911 N. Main Ave.

Dan Graney is active in Bexar County Democratic Party politics. He is the former co-chair of the Stonewall Democrats of San Antonio and CAUSA (Community Alliance for a United San Antonio).

Out in SA has learned that Robert "Papa Bear" Edwards, founder of the San Antonio AIDS Foundation, died of natural...