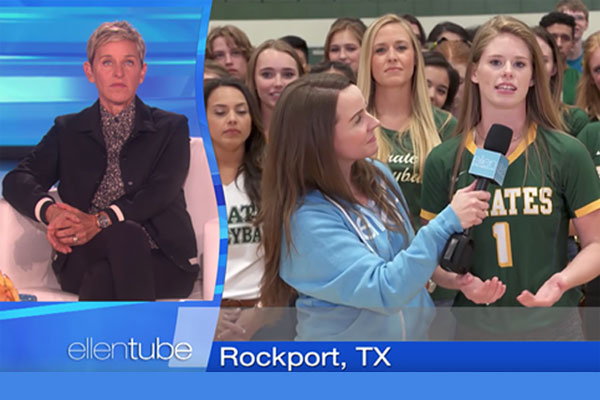 In an emotional segment on The Ellen Show, the talk show host made a major contribution to Texas students affected by Hurricane Harvey.

Rockport-Fulton High School’s volleyball team got national recognition on Monday when they appeared on The Ellen Show via webcast. Many of the girls spoke on-camera, detailing their hopes for the season and how Hurricane Harvey destroyed their gym, which was like a second home for many of them.

Gathering in their local middle school gym, the students thought they were recording a message for EllenTube, where you can spend a whole day watching sappy, feel-good segments. Ellen surprised the high school students (much to their excitement) and checked in on how the community has recovered.

Alison, one of the volleyball players, said much of their relief efforts came from community members coming together to clean up and rebuild around town. On top of that, the team managed to carry on their season.

Being the giver that she is, Ellen partnered with Lowe’s Home Improvement and announced she was donating $1 million – the biggest gift she’s ever given – to rebuild the gym.

Now in its 127th year, Fiesta San Antonio is an annual festival featuring ten days of parties and parades which...