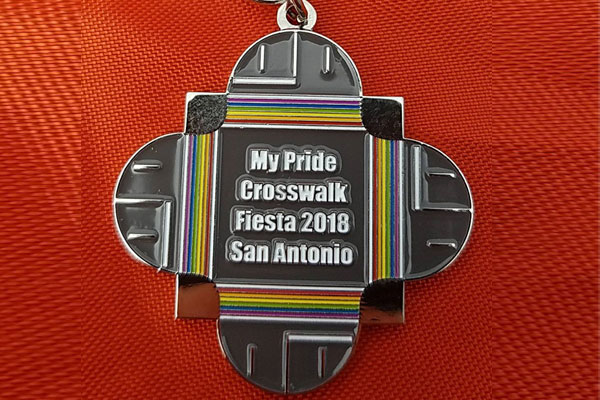 The sale of a special Fiesta medal is spearheading a renewed effort to raise funds for the installation of rainbow crosswalks on the Main Avenue Strip.

The medals sell for $15 and depict an intersection with rainbow crosswalks, along with the words, “My Pride Crosswalk – Fiesta 2018 – San Antonio.” The medal is attached to a pink ribbon.

“I designed and funded a Fiesta medal medal to raise awareness and money for the crosswalk,” City Councilman Roberto C. Treviño told Out In SA. “We met with Pride San Antonio and Randy Cunniff to talk about their support for the crosswalk. Randy agreed to sell the medals on the strip and so far $7,500 has been raised.”

Cuniff owns Luther’s Cafe, Sparky’s Pub, The Heat Nightclub, and the Knockout Sports Bar — all businesses situated adjacent to where the rainbow crosswalks would be installed. The medals are being sold at these locations.

Pride San Antonio is also selling the medals at local events. Anyone wishing to purchase medals in bulk should contact Pride SA at [email protected].

Treviño said an additional $2000 has been raised from private sector donations. “We also have other commitments we expect to come in shortly,” he added.

On July 1, 2017, the day of the Pride festival and parade, a group of volunteers painted a set of rainbow crosswalks in chalk on Main and Evergreen avenues. (Photo by Juilan P. Ledezma)

The total cost for the installation of the rainbow crosswalks is $40,000 with the city covering $20,000 of that amount and the LGBT community raising the balance.

“The Main Avenue Strip has been the center of the LGBT community in San Antonio for decades,” Treviño wrote in the request. “It is the home to many LGBT owned businesses and the site of the annual Pride Parade. The addition of this crosswalk will affirm San Antonio is a place of acceptance and equality.”

A Kickstarter campaign was started in late October to raise $30,000, representing the LGBT community’s portion plus an additional $10,000 for upfront costs and ongoing crosswalk maintenance. However, by December 22 when the campaign ended, only $2,700 had been pledged.

Trevino remains committed to making the crosswalks a reality. “We will not negate the deal and we will work to raise the dollars needed,” he said after the Kickstarter campaign ended.

Crosswalk medals and medals from other organizations will be sold during a Fiesta Medal Party on April 10 from 7 to 9 p.m. at Luther’s Cafe, 1503 N Main Ave.

Humorist, comedian and author David Sedaris will be in San Antonio on April 29 for an appearance at the Tobin...