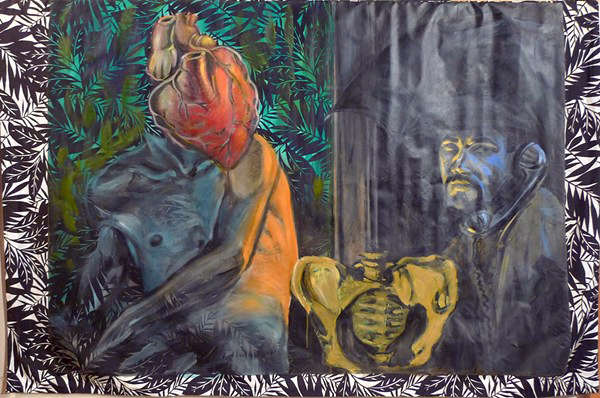 A detail of an untitled double portrait by Ángel Rodríguez-Díaz. (Courtesy photos)

The main gallery exhibition, billed as Angel Rodríguez-Díaz: Nueva York to San Antonio, will shed light on the development of the artist’s technique before his arrival in San Antonio. Rodríguez-Díaz is Puerto Rican and has called San Antonio home since relocating here in 1995 to live with his partner, artist Rolando Briseño.

The Salon gallery will feature The Full Monty/ El Mero Chile, an exhibition of paintings that celebrate the male figure and which were created in New York between 1982 and 1993. It features Rodríguez-Díaz’ most famous work titled Adam, a portrait of a nude Caribbean man that was censored when it was exhibited in 1992.

The exhibitions at Fl!ght Gallery will precede the largest ever retrospective of Rodríguez-Díaz’ work opening on February 9 at the Centro de Artes, formerly the Museo Alameda.

“If I were to characterize him as an artist, the really unique, singular and astonishing thing about his work is how he used his self-portraiture as a vehicle for social commentary,” Cordova says. “He makes a critique of pollution, or fossil fuels, greed, corruption and war in the genre of self-portraiture.”

I meet them as boys on an evening a week before Christmas, at Bakery Lorraine. Louie Canales, who performs as...