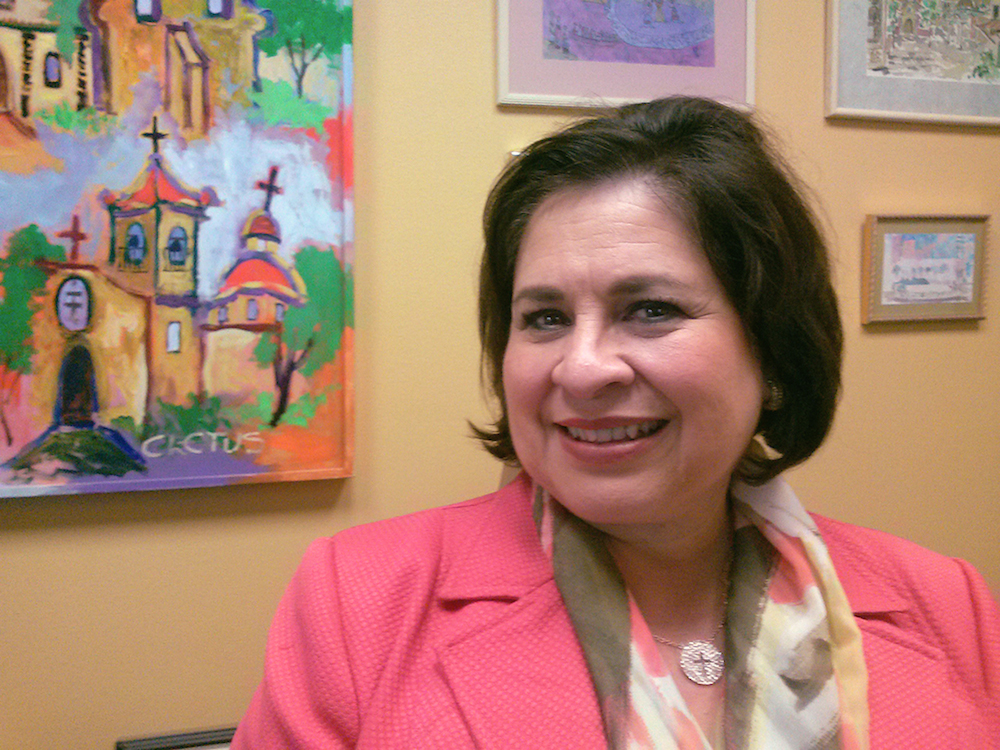 A feeling of post-Fiesta frenzy wafts through the upwardly spacious halls of Leticia Van de Putte’s palatial campaign office on the city’s West Side. A fluffy Spurs wreath hangs on the door of a conference room whose building feels quite lived in, as if the ardent team has been there for years and not “a little before the beginning of the year,” when the former state senator announced her celebrated and much criticized candidacy for mayor of San Antonio.

The city’s highest office may seem like a magnet for those seeking political stardom, particularly those who witnessed the rise of Julian Castro firsthand. But Van de Putte, a bit of an oversell, can’t help but pop her head into the chorus line of campaign opponents, because regardless of whether she wins, the 60-year-old politician has already claimed a place in the state’s and city’s history.

The history of Texas women, in particular. Long before her now famous comment during the attempt to filibuster Senate Bill 5 in 2013, Van de Putte was quietly reforming the status quo for gender equality. When she was first elected to the legislature in 1990, all of her six children were under the age of 10. “Where I got the most grief was from other women,” she says. And particularly other Latinas, who would ask her, “Who’s going to take care of your children when you’re in Austin?”

She explained that Austin was a mere hour and 15 minutes away from her home and that her husband Pete would take care of the kids when she’d have to overnight in the capital. “And people would say, ‘Your husband’s gonna babysit?’ I said, ‘No, my husband’s not babysitting, he’s parenting. I don’t babysit my children; why would my husband babysit his own children?’”

Today, Van de Putte feels there’s more acceptance for the idea that “the role of parents is to parent. It’s dads and moms, two moms or two dads or grandparents or aunts and uncles that are family structures. They’re all so very different. What I’ve seen is a recognition that we want loving, stable homes for [the] children that we’re nurturing, [and it’s] not dependant on who’s playing what role.”

Is that a change in the way society now views gender? I ask.

“I find that it’s not just a gender change, but a change of people who understand that families are all very different,” she says in the delicate intonation that she’s mastered.

Her children now have children of their own and recent political jaunts have taken her away from the Pink Dome, although she doesn’t seem to miss it. She says she developed “an intense appreciation” for San Antonio during her extensive travel last year as candidate for lieutenant governor. Although she succumbed to her Republican rival Dan Patrick (drawing an insufficient 38% of the vote) she recalls the experience as “a gift.” One of those gifts is the piece of jewelry she’s wearing; a necklace given to her by an East Texas woman during the height of the Wendy Davis excitement, an association that will serve Van de Putte as an indelible introduction to a wider audience.

In the final days before the 2014 election, seasoned election insiders daydreamed of a political pie in the sky: a Greg Abbott/Leticia Van de Putte ticket.

Van de Putte throws her head back and laughs. “We heard that a lot, too!” She suddenly appears a bit more relaxed. “I worked well with [Attorney General] Abbott,” she says. “We did disagree on policy from time to time but it was never personal.”

It could be that this objectivity, perhaps the result of her 35-year career as a pharmacist, was the key to her legislative success. Then again, it could be that she not only enjoys statecraft, but the art and strategy of “vigorous” campaigning, too. She attests that the hardest days of her life were when she’d wake up at the crack of dawn, make breakfast and pack lunches for her children. Back then she was either headed to Austin or going to work at her pharmacy. For Van de Putte, running for office and meeting potential voters isn’t strenuous by comparison. “This is actually very joyful. If you really want to be a public servant, you have to like people [and] you have to learn how to listen.”

But sometimes the things a politician has to listen to aren’t so uplifting–and in Van de Putte’s case, they can be brow-raisingly cruel. “I know that politics is tough and there are going to be negative things said. I brush them off,” she says. Focusing on the “greater public good” helps her to keep her mind on things like studying the city’s rapid growth and “understanding where we can be. Our best days are ahead of us,” she says.

“What we have right now is a lack of leadership at City Hall,” Van de Putte says. “Our council members are in less than two terms, less than really two years,” she says. “They all have great skill sets [that] have not been utilized.”

Like her fellow mayoral candidates, Van de Putte must address how tempted she may or may not be to the glittering stage of higher government, that same stage that whisked away our last elected mayor.

“You won’t find me campaigning across the country for any candidate. That’s not going to be my job as San Antonio mayor,” she says, adding that she’s “very proud of the trajectory” of the Castro brothers and believes they’re both “destined for great things.” But the endorsement-rich candidate seems focused on the present. “I will use every friendship, every contact, every relationship I have for the people of San Antonio, not for any political party or any one person.”

If she does win this election, one can’t help but wonder if the impact she had as a legislator could equal the potential legacy of a mayorship. Van de Putte was herself inspired by female state leaders like Barbara Jordan: “She had an unwavering faith in the Constitution that played out during the Watergate hearings.”

Van de Putte’s role in the historical landmarks of her career pale alongside “very personal” experiences like the bipartisan work she did on House Bill 1942, which addressed bullying in public schools. She worked with dozens of parents whose children committed suicide because they were bullied. Among the supporters were the parents of Asher Brown, a 13-year-old boy whose suicide inspired the bill’s creation. “We almost didn’t get it. The moment it passed about a dozen parents were watching,” Van de Putte recalls with a suspense she’s still able to conjure. “After the vote they came running down the floor and I ran outside. They were sobbing [and] I just succumbed to the emotion.”

She takes a deep breath and holds back a brief wave of unexpected emotion.

“They wanted their child’s death to mean something,” she says. “It’s those memories that are the most poignant.”

A local attorney has filed an ethics complaint against Mayor Ivy R. Taylor for her failure to report income she...