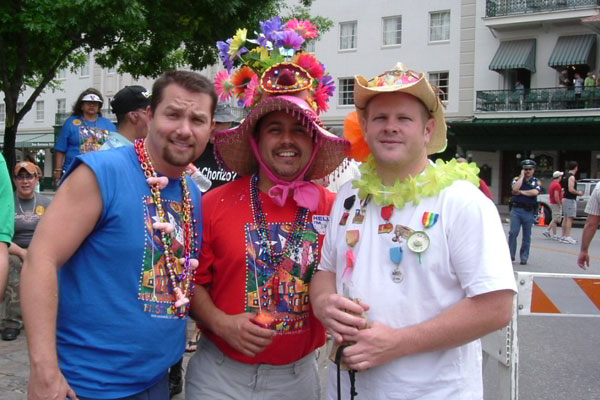 The Battle of Flowers Parade passes along Alamo Plaza in front of the Menger Hotel, an area where traditionally LGBTs gather to watch to the parade. (Photo by Sam Sanchez)

Now in its 126th year, Fiesta San Antonio is a annual festival featuring ten days of parties and parades which this year begin on April 20.

The celebration started in 1891 as a parade to honor the memory of the heroes of the Alamo and the Battle of San Jacinto. It has evolved into one of the premier festivals in the US. April 21- The Webb Party
The San Antonio AIDS Foundation’s Webb Party returns after a one-year hiatus on April 21 at the Bonham Exchange with the 80’s theme, “Reboot,” and a live entertainment roster headlined by American Idol alumnus David Hernandez. General admission tickets are $75 pre-sale (at the Fiesta Store or online at the SAAF website ) and $90 at the door.

April 23 – The Chili Queens Chili Cook-Off
This is an Official Fiesta San Antonio Event benefiting the San Antonio AIDS Foundation’s Kitchen. Come on down and stir it up and taste the great chili prepared by professionals and amateurs alike. Doors open at 3 p.m. with no cover. $3 well and $3 domestics. This is an 18 and up event. ID required. Judging begins at 6 p.m. At the Bonham Exchange, 411 Bonham St. For more information call 210-224-9219. April 25 – Pride Ride to NIOSA
Gay Night at Night in Old San Antonio returns on Tuesday, April 25 with the Annual Pride Ride Shuttle from the Main Avenue Strip to the gates of NIOSA and back. Shuttle runs from 5:00 PM to 10:30 PM. Cost is $5 roundtrip. Proceeds benefit Pride San Antonio. Wristbands can be purchased at Luther’s, The Annex, Heat, Sparky’s, The Essence, and The Silver Dollar.

April 25 -27 – Fiesta Cornyation
Fiesta Cornyation has been proclaimed by its organizers as the “raunchiest and cheapest” event of Fiesta. The extravaganza is part drag show, part satirical revue, part beer hall bawdy-fest. Since becoming a non-profit organization, Cornyation has donated over $2 million to local charities. Tickets are available at the Empire/Majestic Box Office and on Ticketmaster.com. April 26 – Fiesta Frenzy
The 17th Annual Fiesta Frenzy will feature female illusionists, comedians, folkloric dancers, and performance dance groups. Special guest is Scott Pepper from the CW show, “The Magacian’s Agency.” Mistresses of Ceremonies are Eryca Daniels and Autumn Summers. A portion of the proceeds will benefit the Dub Daughtery Benevolent Fund. On April 26 at 8 p.m. at Woodlawn Pointe, 702 Donaldson Avenue. General admission is $20. Purchase tickets at this link. April 29 – Fiesta Finale Block Party
The final night of Fiesta will be celebrated on the Main Avenue Strip with a block party in front of Sparky’s, Heat and Knockout. There will be live music, vendors, food and fun. There is no cover for this event.

The San Antonio AIDS Foundation's Webb Party returns after a one-year hiatus on April 21 at the Bonham Exchange with...