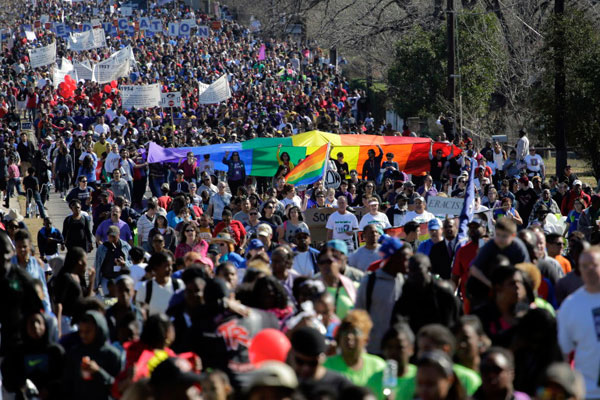 The Rainbow flag stands out at the 2014 Martin Luther King, Jr. March. LGBT groups plan to participate in this year's event on January 15. (Courtesy photo)

Leaders of San Antonio’s LGBT community organizations are circulating an email among their members and allies encouraging them to participate as one large contingent in the city’s Martin Luther King Jr. March on Monday, January 15.

“All LGBT organizations and their members, as well as any interested individuals are invited to march together for a show of unity and strength of our community, in the 50th National Anniversary March,” the email states.

“This is not really being organized by any particular organization, It’s actually more organic,” Darrell Garcia Parson, board president of Fiesta Youth, told Out In SA. Groups plan to meet in front of the Martin Luther King Jr. Academy, located at 3501 Martin Luther King Drive, starting at 9:00 a.m. Marchers should look for the rainbow flags and other banners of local LGBT organizations. Participants are encouraged to bring their own banners, flags, or signs with “messages of hope, courage, and love.”

To access the free Via bus service, riders are asked to park at Freeman Coliseum, 3201 E. Houston St. (Lot 1), or St. Philip’s College, 1801 Martin Luther King Dr. (Lot 22), between 8 and 10 a.m., Monday. The drop-off point for service to the march will be on MLK Drive, west of Upland Drive. The pick-up location for return service will be at Pittman Sullivan Park, 1101 Iowa St. Buses will return between noon and 3 p.m. Rev. Dr. Raymond “R.A.” Callies, Sr. began the S.A. march in 1968. His efforts have resulted in what has become one of the largest commemorative marches for Dr. King in the U.S.

In addition to participating in the MLK March, the local chapter of the Human Rights Campaign is sponsoring a “day of service” on Saturday, January 13 at Roy Maas Youth Alternatives Turning Point Program, a shelter for kids, one of the few in South Texas that is welcoming to LGBT youth.

Volunteers will spend the day assisting with grounds maintenance, participating in activities with the residents and sharing lunch with them.

HRC San Antonio MLK Day of Service, Saturday, January 13 at from 9 a.m. to 2 p.m. at Roy Maas Youth Alternatives, 3103 West Avenue. If you are interested in volunteering, send email to: [email protected].

Lupe Valdez, a Democrat, kicks off gubernatorial bid in Dallas