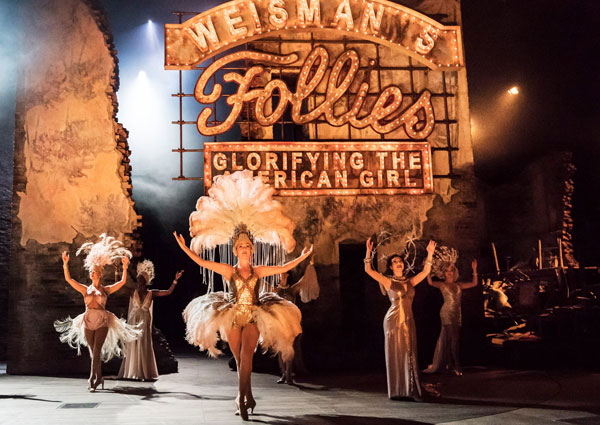 Two live performances of the National Theatre of Great Britain’s production of the Stephen Sondheim musical, Follies, will be screened at San Antonio’s Bijou Cinema Bistro on November 30 and December 5.

With a book by James Goldman, Follies centers upon a gathering of former showgirls in a crumbling Broadway theater which is slated for demolition. Several of the showgirls perform their old numbers while ghosts of their former and younger selves hover in the background. The story also encompasses the conflicts of two older couples who are unhappy in their marriages and who dwell on “what could have been.” The original Broadway production premiered in 1971 and was nominated for 11 Tony Awards, winning seven. Several of the show’s songs have since become standards, including “Broadway Baby,” “I’m Still Here,” “Too Many Mornings,” “Could I Leave You?” and “Losing My Mind.”

The National Theatre revival, which opened in London in September, has received glowing reviews. “I’m thrilled to report that Dominic Cooke’s version in the Olivier [Theatre] surpasses your wildest dreams for this show. It’s jaw-droppingly great,” theatre critic Paul Taylor wrote in The Independent.

The show stars Tracie Bennett, Janie Dee and Imelda Staunton, along with a cast of 37 and an orchestra of 21.

National Theatre Live presents: Follies, Thursday, November 30 at 6:30 p.m. and Tuesday, December 5 at 6:30 p.m. at the Bijou Cinema Bistro, 4522 Fredericksburg Road in the Wonderland of Americas Mall. Tickets are $20 and can be purchased online.