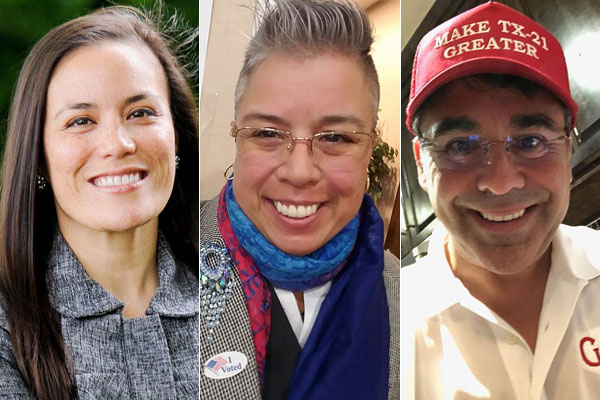 As the primary election nears on Tuesday, March 6, nearly 50 LGBT candidates around the state, including three from San Antonio, are making last minute pitches. These candidates are running in races for Congress, the state government and legislature, and positions in county and city government.

This year, nearly three times more LGBT candidates running than in any previous election cycle in Texas history. The trend has been attributed to the controversy whipped up by Texas Republicans’ efforts to pass an anti-trans bathroom bill and other anti-LGBT bills, and by the numerous attempts by the Trump administration to quash LGBT rights.

In San Antonio, two local candidates are running for Congress, one as a Democrat the other as a Republican. Rounding out the list is a candidate for judge.

Gina Ortiz Jones is competing in a field of five Democratic candidates for the 23rd Congressional District seat which is currently held by Republican Will Hurd.

The other competitors in this race are: Judy Canales, a former Clinton and Obama appointee from Eagle Pass; Jay Hulings, a former federal prosecutor from San Antonio; Rick Treviño, a former high school teacher from San Antonio who unsuccessfully ran for city council; and Angela “Angie” Villescaz, who has not participated actively in the campaign.

Ortiz Jones is a graduate of John Jay High School who was raised by a single mom who came to U.S. from the Philippines. She earned a BA and MA in economics from Boston University which she attended on a four-year Air Force ROTC scholarship. After serving in the Air Force for three years, Ortiz Jones pursued a career in national security, intelligence, and defense which included working for the Pentagon’s Defense Intelligence Agency. Most recently, she was employed in the Office of the U.S. Trade Representative.

In an interview with the Texas Tribune, Ortiz Jones offered her thoughts on why there are so many LGBT candidates this year. “It’s been shocking for many of us how easily some of the progress we’ve made can be ripped away. And a lot of folks are done assuming someone is going to do what we could do ourselves,” she said.

This is Gonzalez’s second run at the County Court 13 seat. In 2014, she ran unopposed in the Democratic primary and went on to the general election to face off against Republican Crystal Chandler, a Bexar County assistant criminal district attorney who won the race.

Born and bred in Brownsville, Texas, Gonzalez has lived in San Antonio for over 30 years. She attended St. Mary‚’s University where she earned her Bachelor of Arts in Political Science and later her law degree. Gonzalez has a family law practice and is a graduate of the Women‚’s Campaign School at Yale University. She has a long established history of coordinating campaigns and consulting for women candidates.

“I decided to run because I believe I can bring real life experience to that bench, offer innovative perspectives as to how to best serve victims and hold perpetrators accountable and add diversity to the judiciary in Bexar County,” Gonzalez told Out In SA.

Mauro E. Garza, owner of the Pegasus, a gay nightclub on the Main Avenue Strip, is one of 18 candidates in the Republican primary for the Texas 21st Congressional District, the seat held for the last 30 years by Lamar S. Smith (R-San Antonio).

Garza, a native of Corpus Christi, has lived in the San Antonio area for almost 30 years. He received a Masters of Science from the University of Texas at San Antonio and was an adjunct faculty member at San Antonio College for seven years. His career includes stints at Southwest Analytical Concepts, Southwest Foundation for Biomedical Research, and the Texas Commission on Alcohol and Drug Abuse.

In 2010, Garza ran as a Democrat for Justice of the Peace, Pct 3, narrowly losing the primary to William Peche by 122 votes.

Garza has received no significant endorsements and his chances of advancing to the run-off in such a crowded race are slim. In the final weeks of the campaign, he is using his own money to run full page newspaper ads and television commercials.

On his campaign website, Garza lists health care, veterans, the economy, foreign policy, education, and science and technology as his “key issues.” Despite being a gay man, Garza makes no mention of LGBT topics.

However, on his campaign Facebook page he writes in a post, “The only LGBTQ agenda I push is that of RESPECT. I do not wish to force Americans to understand our culture and various subcultures or even to accept them. However, I will continue to fight for the American Agenda that allows the Members of the LGBTQ Community to exercise our freedoms within the parameters of the laws in this great nation.”

An Austin car dealership is appealing the decision of a U.S. District Court judge who ruled the company cannot dismiss...