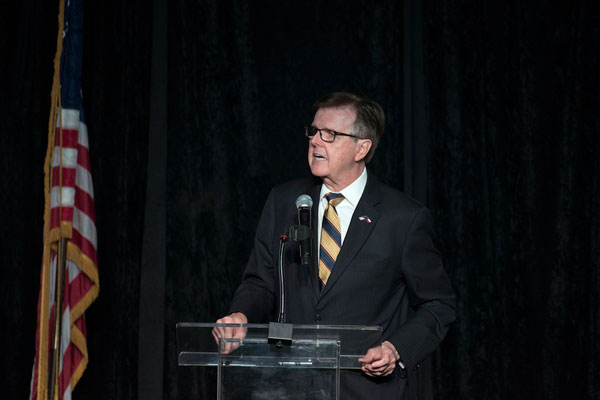 HOUSTON — Lt. Gov. Dan Patrick expressed support Friday for “a House companion” to the Texas Senate’s “bathroom bill” that has been one of his biggest priorities this session.

“Senate Bill 6 — or a House companion — we need to pass,” Patrick said during remarks at the Harris County Republican Party’s annual Lincoln-Reagan Dinner on Friday night. Patrick has been relatively quiet on the lower chamber’s recent effort to provide an alternative to the controversial legislation.

House Bill 2899 would ban municipalities and school districts from enacting or enforcing trans-inclusive bathroom policies. It remains in the House State Affairs Committee but has steadily gained support since a hearing last week. Many of its current 44 co-authors signed on after the hearing.

Gov. Greg Abbott has signaled support for HB 2899, calling it “thoughtful” after months of silence on SB 6. In a video played at the Harris County GOP dinner, he reiterated he looks forward to signing a bill that addresses the issue.

Whether it is SB 6 or HB 2899,  the proposal still faces a major hurdle in the lower chamber, where House Speaker Joe Straus, R-San Antonio, has held firm against such legislation, worried it could hurt in the state economy.

Patrick also weighed in on negotiations over the state’s budget, which is currently in conference committee. One of the biggest differences between the House and Senate plans is the lower chamber’s decision to tap the Rainy Day Fund — the state’s savings account — to the tune of $2.5 billion. The Senate proposal does not touch the fund, instead relying on an accounting trick to free up the money.

“The Texas Senate will not spend Rainy Day funds for ongoing expenses and programs,” Patrick said, raising the specter of a special session if the lower chamber does not come around to that position. “I hope we will get the House to agree with us, or I won’t be back home, Jan” — Patrick’s wife — “in June, in July or in August because we’ll still be” negotiating.

The dinner also heard from U.S. Sen. Ted Cruz, R-Texas, who is up for re-election in 2018 and used his remarks to tout two bills he has already had signed into law by President Donald Trump. He did not mention his developing re-election race — U.S. Rep. Beto O’Rourke, D-El Paso, is already running, and U.S. Rep. Joaquin Castro, D-San Antonio, could announce a decision in the coming days — but Abbott gave him up a vote of confidence.

“The Democrats are squabbling over who they think should take on Ted Cruz,” Abbott said in the video message. “Let me tell you — it’s irrelevant. We will beat whichever Democrat they put on the ballot.”

The dinner’s keynote speaker was House Majority Leader Kevin McCarthy of California, who promised House Republicans would break through next week in their efforts to unwind Obamacare. A high-profile effort to do so collapsed earlier this year.

“Stay tuned,” McCarthy said. “Watch next week, and you will see the repeal and replace of Obamacare.”

Another LGBT organization has thrown its support behind City Councilman Ron Nirenberg with the San Antonio Gender Association's April 30...