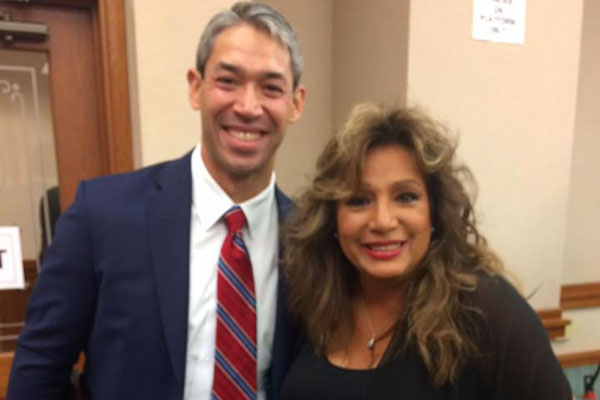 San Antonio Mayor Ron Nirenberg was among the hundreds of people who testified on Friday, July 21 before the Texas Senate Committee on State Affairs, speaking out against two anti-trans bathroom bills introduced by state Sen. Lois W. Kolkhorst (R-Brenham).

In his testimony Nirenberg said, “This legislation puts transgender people in the crosshairs of discrimination, in an attempt to protect children and women from a problem that clearly does not exist.”

Nirenberg also submitted his remarks in letter to state Senator Joan Huffman, the Chair of the Senate Affairs Committee.

The bills, SB 3 and SB 91, limit the use of multiple-occupancy restrooms, showers and changing facilities, including those in schools, to “persons of the same sex as stated on a person’s birth certificate.”

Additionally both bills mandate that counties, cities, towns, villages, and school districts cannot adopt laws or policies protecting “a class of persons” from discrimination, effectively nullifying local nondiscrimination ordinances. Schools would also not be allowed to let trans athletes participate in sports unless it’s on teams that match the athletes’ gender at birth.

Text of Mayor Ron Nirenberg’s comments before the Committee on State Affairs:

Chair Huffman and Members of the State Affairs Committee:

Thank you for the opportunity to be here today.

The City of San Antonio stands with other communities in opposition to Senate Bill 3 and Senate Bill 91 by Senator Kolkhorst.

San Antonio is a welcoming and inclusive place, where people from many backgrounds and beliefs come together to make it a great place to live and visit. These bills are in direct conflict with the values we hold as a community.

This legislation puts transgender people in the crosshairs of discrimination, in an attempt to protect children and women from a problem that clearly does not exist. This legislation threatens the state’s economy and lives of citizens we all represent because discrimination is as bad for business as it is for the safety of the most vulnerable members of our community.

SB 3 and SB 91 would create the highly negative and harmful perception that San Antonio is not an open and hospitable place.

Like all Texas cities, San Antonio competes for business relocations, conventions, and major sporting events. The passage of a bathroom bill would impair our ability to compete across the nation. Just the filing of the bill has already cost San Antonio millions of dollars in lost conventions. I am here with Casandra Matej, CEO of Visit San Antonio, who will discuss in detail the detrimental effect this has had on our local tourism and convention industry.

We focus economic development efforts on targeted industries such as advanced manufacturing, information technology, cyber security and healthcare. Businesses will expand and move to cities where they can attract the talent pool they need. On Monday, David Heard, co-founder and CEO of Tech Bloc, an organization in San Antonio that advocates for the growing tech industry, stood on the Capitol steps with other Texas business leaders to reinforce the harm this discriminatory bill would have on Texas. Giving reason for candidates or companies to think twice about coming here does not help our economic development efforts.

San Antonio stands united against this legislation. Bexar County superintendents representing 16 school districts have signed a letter voicing opposition to this legislation. Also, the Chambers of Commerce stand together in opposition to this divisive, counterproductive and discriminatory bill. Richard Perez, President and CEO of the San Antonio Chamber of Commerce is here today. Several prominent San Antonio business leaders have stated that legislation like the regulation of bathrooms diverts much needed attention from what really matters, like public education financing.

Proponents of the bill have state that it is geared toward public safety. You have at your dais a letter from Police Chief William McManus stating that sexual assault in public restrooms is not a problem in San Antonio. Multiple state laws already criminalize the conduct this bill purports to address. In other words, SB 3 and SB 91 is a fix in search of a problem.

Thank you for considering the City of San Antonio’s opposition to SB 3 and SB 91. To help ensure a more save and inclusive Texas for all, we hope you will stand with us in opposition.

The Big Easy has cast its spell over David Garcia with all its magical charms and has rendered him a...