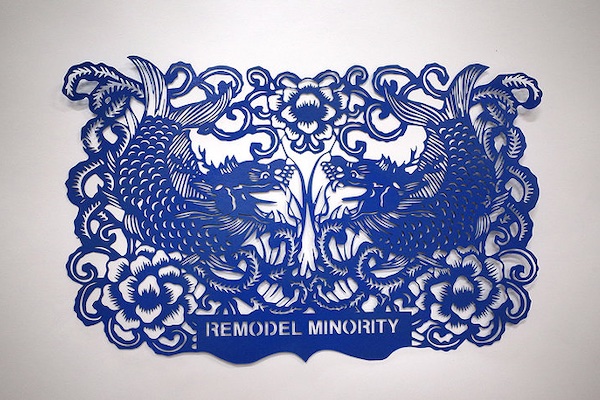 The show challenges preconceived notions about Asian Americans, particularly ones that ignore the challenges people face in their adopted homeland.

A new exhibition at the McNay Art Museum challenges preconceived notions about Asian Americans, particularly ones that ignore the challenges people face in their adopted homeland.

The works in “Reflecting Selves” refute the idea of the “model minority” — a stereotype that took hold in the 1980s which implies Asian Americans are superior to and should be viewed as the ideal example for other U.S. immigrant groups. The concept ignores the diversity of Asian Americans experiences and the discrimination they often face.

Tucked away near the far end of the Museum’s Garden Level, the exhibition is small in scale but still packs a punch. As a visitor whose family is of mixed Mexican American and Filipino ancestry and includes members of the LGBTQ+ community, the exhibition felt personal. I wanted to learn more about the communities around me and see others like myself represented on the walls of the museum.

Ben Aqua’s photo series Theysians, seen here in video form, includes more than 20 portraits, making up the bulk of the exhibit’s 36 artworks. From dark skin to light skin, and from pink hair to no hair, the features of the many subjects included in Theysians reflect the diversity of the queer Asian American and Pacific Islander community in Texas. One of the subjects wears bunny ears while another wears sunglasses. The portraits range from lighthearted to serious in tone, each giving a glimpse into the world of the individual being photographed.

“The process of creating these photographs has become a mirror for my experience as a queer, non-binary, Korean American; each image acting as a record of diversity, existence, struggle, resilience and connection,” Aqua reveals in an artist statement. “The portraits invite the viewer to question: what does being a ‘queer Asian’ mean, what is our connection to Texas, and how can we thrive authentically in a world which often stereotypes and tokenizes AAPIs into rigid ‘model minority’ boxes?”

In an interview with the Current, curators Li and Straus said they didn’t set out to look for queer artists. Initially, their goal was to find artists not only focusing on identity but also challenging stereotypes. Coincidentally, all five artists they ended up selecting identify as queer.

Straus further explained that “Reflecting Selves” falls in line with the McNay’s mission of presenting diverse programming and exhibitions. Everyone at the museum welcomed the idea for the exhibition with open arms, she added.

Vietnamese American artist Antonius-Tín Bui, who works with traditional paper cutting methods, challenges ideas of Asian Americans as apolitical and submissive with his series Not Sorry for the Trouble. Bui’s delicately crafted creations, which resembled vases and other objects, include phrases such as “remodel minority” or “not your novelty.”

“I daydream of all the boundless, infinite ways we’ll be able to not only identify, but be seen, respected, and loved beyond the English language,” Bui wrote in a statement. “A queer utopia where I am celebrated for everything I am, not just for the work I produce.”

Zoë Watts, Jana Ercilla and Brandon Tho Harris each present a series of photographs that examine the shared trauma Asian Americans and Pacific Islanders experience.

Harris explores hidden familial histories while Watts considers outside perceptions of a gender non-conforming self.

Ercilla’s series of portraits explores the concept of colorism, or how those with lighter skin are given privilege over those with darker skin within a certain community. In Itim, five seemingly vulnerable figures reveal their bare shoulders and make-up-free faces, highlighting their various skin tones. Some of the subjects stare directly at the viewer while others look away.

“Colorism was and is still imbued within Filipino culture,” Ercilla’s artist statement reads.

“Daily reminders come in the form of TV advertisements for whitening soap, wearing long sleeves to the beach and grandparents reminding kids to not play too long in the sun.”

To help guide exhibition visitors, the museum has posted a learning guide on its website that includes key glossary terms, resources for both the LGBTQIA+ and Asian American communities and statements by each artist.

Food Truck Journey: Chef Ryan Rhys is all about change in his personal and culinary life

The transgender chef-owner of the Satisfried food truck also operates the Enzo's Culinary Events catering outfit. It's no exaggeration to...