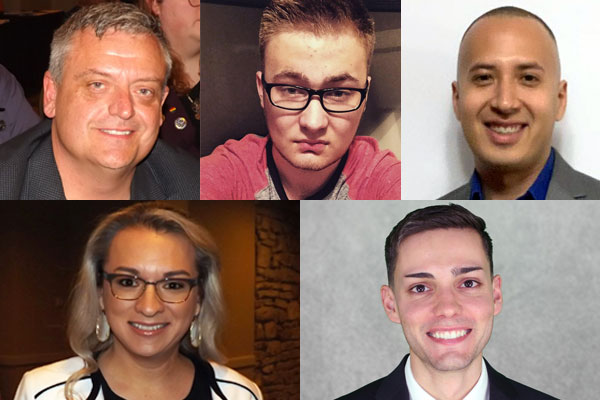 San Antonio voters in Districts 1, 4, 8 and 9 will have the opportunity to cast their ballots for an LGBTQ City Council candidate in the May 4 General Election. This election season brings five queer candidates, a record number.

San Antonio has elected only one previous LGBTQ City Council member. In 2005, Elena Guajardo won the election and served one term.

Following is the list of LGBTQ candidates running in the General Election and statements they made to the Stonewall Democrats of San Antonio.

Justin Holley, District 1
Occupation: Owner, Hotel management company
Campaign website: votejustinholley.com/
“It is time to return our City Council to the role of being a board of directors over the city manager’s office. Focus on District 1 needs to be to strengthen the neighborhood associations, the business community and nonprofit associations to be able to insure engagement, economic inclusion and education for all living within the district.”

Colton Unden, District 1
Occupation: Barista trainer
Campaign website: coltonunden.org/
“Having The Strip and a large LGBTQIA population in my district, I think its critical we invest in LGBTQIA-owned businesses and beautifying infrastructure on The Strip and create a special district in the area honoring LGBTQIA civil rights fighters. I also support the creation of a Department of Human Rights similar to NYC to support LGBTQIA rights and advocacy along with other matters.”

Joel Mendoza, District 4
Occupation: Insurance sales
Campaign website: facebook.com/joel4district4/
“One of my platform issues is to provide more outreach programs to our youth (including LGBTQIA), Seniors, and Veterans. Many of our own people are forgotten about and feel like there is no one they can reach to. We need to make sure there are several resources for residents in our city and District 4 in particular, that are available to them.”

Frankie Gonzales-Wolfe, District 8
Occupation: Political consultant
Campaign website: facebook.com/frankiefor8/
“I am a very proud trans woman running for office and have been a member of the Democratic Party for 23 years now. I have worked on over 50 local, state and national elections and ballot initiatives and have worked tirelessly to elect candidates that I felt were going to be the best representation of my voice at the table. With today’s political climate, and the LGBTQIA community continuously being marginalized for simply living our truth, I was left with no other option but to stand up, raise up and use my own voice while working to have a seat at the table. Representation is important and our government should be depictive of its community.”

Nicholas Balderas, District 9
Occupation: Software developer
Campaign website: votebalderas9.com/
“As someone who was bullied in high school for being gay, I know what it feels like to be discriminated against. Running for the San Antonio City Council, every action and decision I make will be not just be with the LGBTQIA community in mind, but all people.”

The 2019 General Election is on Saturday, May 4. Early voting begins on April 22 and ends on April 30. Today (April 4) is the last day to register to vote in this election. Use this link for generic sample ballot and early voting locations.

Fiesta Youth's biggest fundraiser of the year, Midnight in the Garden of Good and Evil, will mark its fifth year...