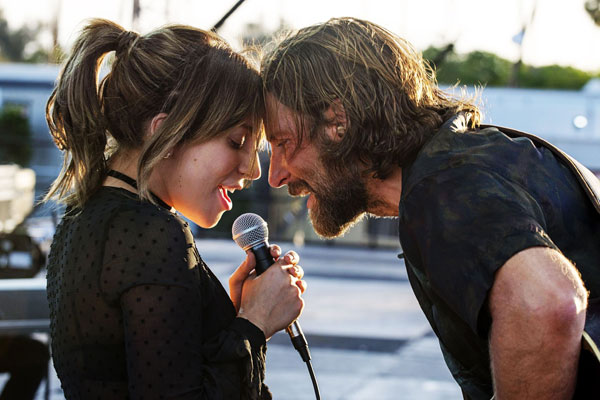 Three-time Academy Award-nominated actor Bradley Cooper (American Sniper) makes a mostly convincing, albeit imperfect, directorial debut with A Star Is Born, the third reimagining of the film since the original version hit the silver screen more than 80 years ago.

Witnessing Ally and Jackson courting each other during the first act of the film is when A Star Is Born is at its most charming and romantic. It never reaches the level of something like 2007’s Oscar-winning Irish drama Once, but Cooper and Gaga sell their relationship as a genuine love connection, despite its seemingly quick development.

Movie magic occurs when Jackson invites Ally onto the stage during one of his concerts to perform a duet with him. It’s unrealistic to think an original song could actually come together like that without a bit of rehearsal, but by the time Ally bravely takes the mic to sing the second verse of “Shallow” (a song co-written by Gaga, which will undoubtedly land an Oscar nod for Best Song), there’s no real reason to argue logic. The single is that good.

As soon as their relationship is established, however, the script starts losing momentum and seems to find comfort in falling into familiar territory. Again, A Star Is Born has a long history of remakes, so it shouldn’t be a surprise that screenwriters Eric Roth (The Insider), Will Fetters (The Best of Me) and Cooper, who is also credited as a writer, follow a conventional template. The dimming of one star and the rise of another is a formula that has worked well in the past, but Cooper is only somewhat successful in transforming it into a story that truly feels fresh.

During a scene in the final act, Jackson’s older brother Bobby (Sam Elliott) explains to Ally what Jackson’s musical philosophy is by describing music as “12 notes between any octave — 12 notes and the octave repeats” and adding that it’s up to the artist to say something significant enough inside those parameters to move listeners emotionally. In A Star Is Born, Cooper and Gaga have voices worth listening to, especially when they’re harmonizing in front of a crowd of thousands. We just wish the narrative mixed in a few more sharps and flats to ensure a clearly distinct sound and experience.

27th Annual Run & Walk for AIDS Steps Off on Saturday

The San Antonio AIDS Foundation's 27th annual Run and Walk for AIDS will step off on Saturday, October 6 at...