In his address to Stonewall members at their endorsement forum on Sunday, March 10, Nirenberg, the now-incumbent mayor, reiterated the message that he is mayor of all the citizens of San Antonio.

Saying that he spent his “first nickel of political capital” in supporting the nondiscrimination ordinance, which was enacted in 2013 when he was a councilman, the mayor said that “compassion, inclusion and equity” should be guiding principles for the governance of the city.

Nirenberg’s most high-profile opponent in the 9-man mayoral race is City Councilman Greg Brockhouse, who told the Stonewall audience that he was still “learning the language of the LGBTQ community” but would never do anything to harm them.

Brockhouse said he knew he would not get the endorsement but came to the Stonewall forum to hopefully open up a discussion for the future. He said he had reached out to “prominent members of the LGBTQIA community” to learn about the issues but was “rebuffed and ignored.”

“It’s difficult to learn more about LGBTQIA community concerns and policy initiatives when outreach is met with no response,” Brockhouse said in his candidate questionnaire. 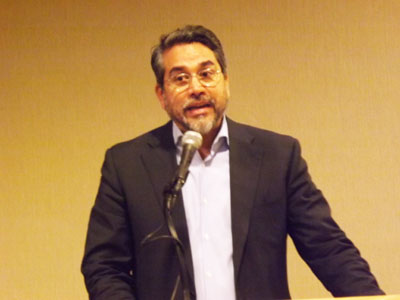 In the District 1 race, which is always of particular interest to LGBTQ voters, Roberto C. Treviño got the first Stonewall endorsement of his two-term career as a councilman.

The first year he ran for the office in 2015, Treviño did not attend the Stonewall forum and did not submit a candidate questionnaire. When he ran the second time in 2017, the endorsement went to Michael Montaño, an attorney who captured the widespread support of the LGBTQ community. Trevino went on face Montaño in the runoff and beat him by garnering 52 percent of the vote.

During his second term, Treviño managed to endear himself to the LGBTQ community after he helped raise funds for the rainbow crosswalk, which was installed last June on the Main Avenue Strip, and by facilitating the acquisition of a home for Pride Center San Antonio in a medical office building on the eastern edge of Crockett Park.

Treviño’s leading opponent in 9-man District 1 race is Justin Holley, an executive with a local hotel management company. In an interview with the Rivard Report, Holley said he is fiscally conservative, socially liberal, and as a gay man believes, “Government is there to protect its citizens. Everyone should be treated equally.”

In past elections, Stonewall has tended to endorse LGBTQ candidates over others, but in this race Holley did not get the nod.

In District 8, the incumbent Manny Pelaez got the endorsement in a 3-person contest that includes transgender candidate Frankie Gonzales Wolfe.

Incumbent John Courage got the nod in District 9, a 4-man race in which one candidate, Patrick Von Dohlen, who is the president and founder of the anti-LGBTQ San Antonio Family Association, wrote on the Stonewall questionnaire that he did not want the group’s endorsement.

Following is the complete list of Stonewall Democrats’ endorsements.

The municipal election is on Saturday, May 4. Early voting begins on April 22 and ends on April 30.

Check out our slideshow of the Stonewall Democrats Endorsement Forum at this link.

Over 30 candidates for mayor and city council attended the Stonewall Democrats of San Antonio's endorsement forum on Sunday, March...