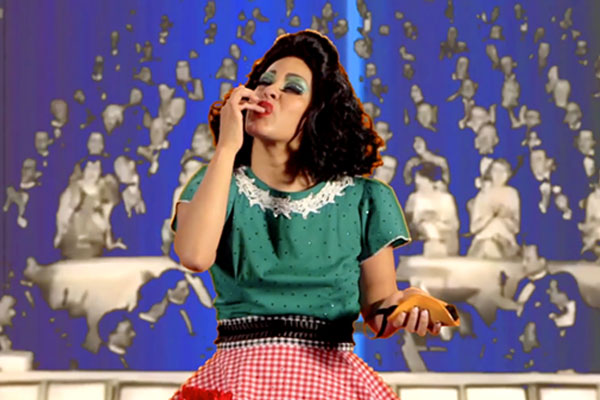 Last year, the duo — comprised of partners Suzy Gonzalez and Michael Menchaca — co-curated the group exhibition “XicanX: New Visions,” which debuted in December with a selection of works by 11 artists at The Clemente, a New York City institution dedicated to the cultivation, presentation and preservation of Puerto Rican and Latino culture.

For its second iteration, “XicanX” expanded significantly to include 34 artists and 70-plus works that currently fill the ground floor of Centro de Artes — originally the Smithsonian-affiliated Museo Alameda and now a city-owned exhibition space. A press release sent out by San Antonio’s Department of Arts & Culture explained that the local leg of “XicanX” aimed to challenge “previous and existing surveys of Chicano and Latino identity-based exhibitions” while highlighting “the womxn, queer, immigrant, indigenous and activist artists who are at the forefront of the movement.” 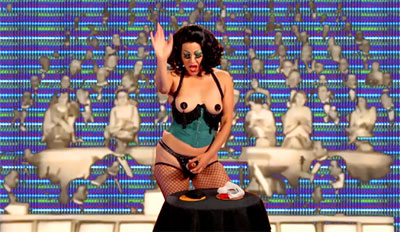 Before “XicanX” opened to the public on February 13, a video piece by El Paso-born, Oakland-based artist Xandra Ibarra was deemed as “obscene content” by City Attorney Andy Segovia and removed from the exhibition. An award-winning performance artist who also works under the moniker La Chica Boom, Ibarra creates videos, performances and sculptures as a means “to explore abjection and joy and the borders between proper and improper racial, gender and queer subject.” Taken from her 10-year project Spictacles, the piece in question is the 2004 video “Tortillera,” which you can stream on Vimeo.

From the description included on Ibarra’s website, the five-minute video depicts the artist as she “takes on her own racial bondage to hot sauce, tacos and demographic panic … She dances a ’60s border corrida as a minstrel Mexican housewife, makes tacos with her panties, and jacks off/spreads her seed onto tacos with her Tapatio strap-on.” Although there are some G-stringed butt shots and tassel twirling à la classic burlesque, “Tortillera” isn’t a nude spectacle but a conceptual satire — all the way down to Ibarra’s spicy money shot. In the artist’s own words, “the video is designed to challenge normative ideals of Mexican womanhood and is in alignment with the historical lineage of LGBTQAI+ artists’ strategies to intervene in homophobic and sexist violence.” 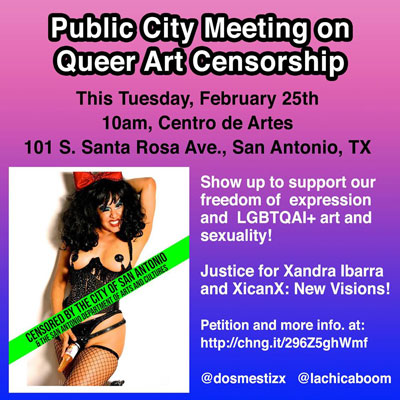 On Wednesday, February 19, Gonzalez and Menchaca attended the City of San Antonio’s Arts Commission meeting and made their case that the censoring of Ibarra’s work “violates civil rights of freedom of speech and expression, as granted by the U.S. Constitution,” and likened its removal to “banishing queer, sexual, feminist and Latinx creative expression, an act of discrimination and glaring homophobia.” As a result, the commission agreed to hold a public meeting on Tuesday, February 25 (10am at Centro de Artes, 101 S. Santa Rosa Ave.) to address the censorship issue and review the work in question.

The Current reached out to San Antonio Department of Arts & Culture Director Debbie Racca-Sittre for comment and received the following statement via Assistant Communications & Marketing Manager Carol Schliesinger: “As is true of all exhibitions in this public facility, the Department of Arts & Culture has the contractual and legal right to determine what is displayed in this publicly funded space. We received the video the day before the exhibit opening, and after reviewing, we determined Centro de Artes was not an appropriate venue for its display. It is not uncommon to have works on loan that, upon review, never make it into an exhibit for various reasons.”

Meanwhile Dos Mestizx launched an online petition at Change.org titled “Protect the Civil Right to Exhibit Queer Art in San Antonio Today,” which had collected more than 600 signatures at the time of this writing.