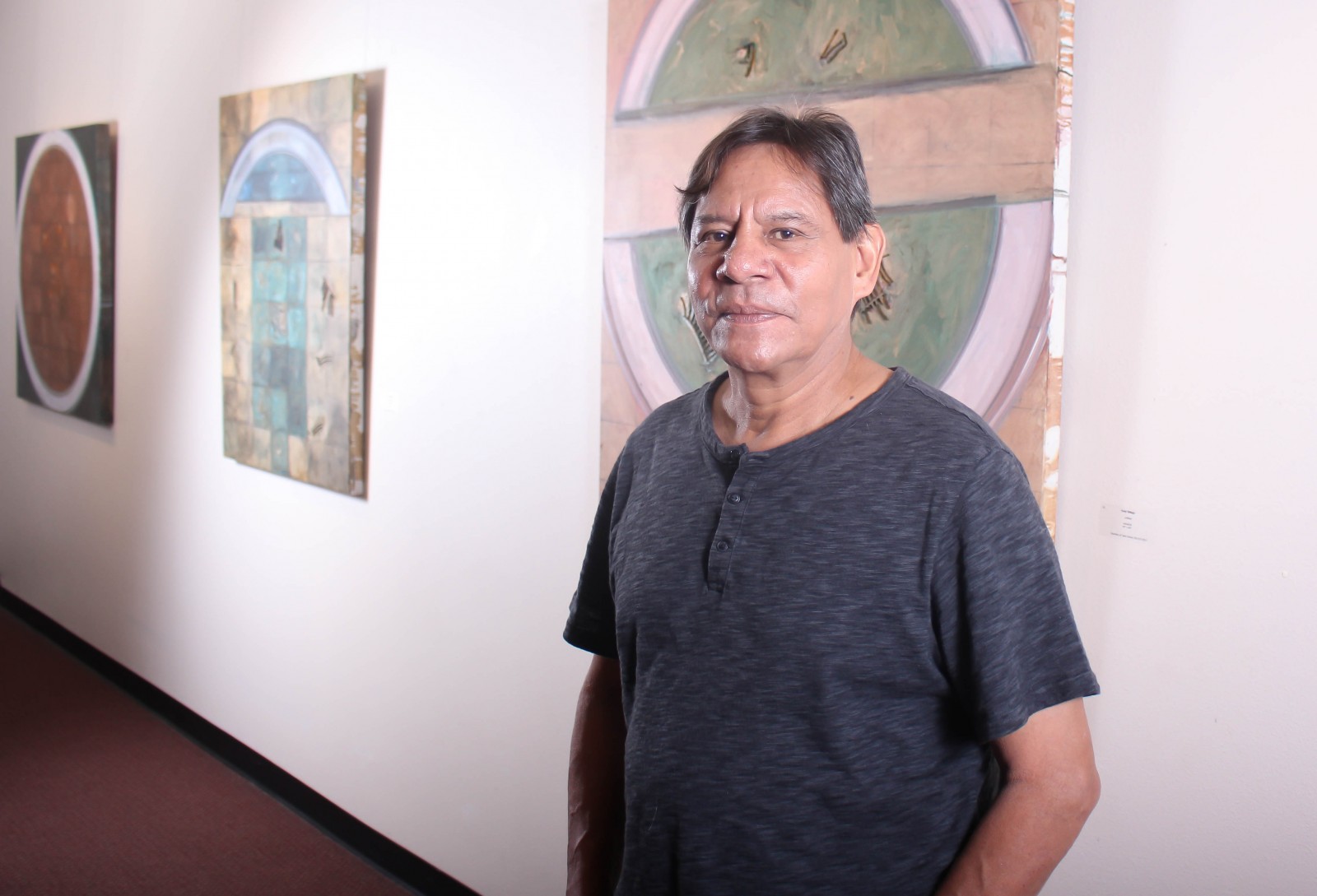 Gene: Hi Tony! Welcome to the Chartreuse Couch.
Tony: Hi Gene, thanks for the interview.

Gene: Well, we have been friends since you were one of the first artists to have a studio at Blue Star. It was quite a dump then. Why don’t you recall that experience for us.
Tony: Well Gene, 1986 at the Blue Star, that was certainly a place back in time that has always been a bittersweet memory. I will say that it was definitely a productive and creative time for me because of its rawness. At the time I was self-employed as an artist. I worked on quite a few theatrical productions as a set designer. I’m sure that you recall the early days. We all had this hairbrained idea that we could somehow carve out some type of niche in the art community. Now, the sweet part was the fact [that] I wasn’t making money. I constantly worked. You know, back then, there was this unspoken camaraderie amongst the few artists that did tough it out under those conditions. Blue Star, at that time, had this strange ambiance about it, like some sort of mysterious ghost town with, of course, the artists as the ghosts. The emptiness of the complex provided enough room for everyone to breathe and think clearly without inadvertently running into someone to break your concentration. And if you did notice anyone else, you more or less picked up on this vibe that they were at some sort of a crossroads in their work and that a simple acknowledgment would suffice. You really had to go out of your way for conversation. Villejo’s studio in the Blue Star Arts Complex circa 1987

Gene: Interesting that you remember it that way. I liked it then. What about your parade floats?
Tony: In the ’70s and ’80s, I did float design, construction, production, everything. It was a job, but I learned how to work big. I would highly recommend it for the art experience, and not be discouraged by the business end.

Gene: Well, that makes sense. Artists really need to have real life experiences to work from. How else did you earn money?
Tony: In the beginning, I figured I needed to earn some type of a living wage, and that this “utopian” existence was not destined to last forever. I’d worked on a few theatrical productions. However, back at the parade business, one had to almost immediately adapt. For me, it was a vast playground of materials. You are basically armed only with an idea, a design and the problem of making it into a three dimensional object.

Gene: Keep going. This is good.
Tony: Objects were welded, carved, painted, motorized — it ran the whole gamut, not to mention the scale of the constructions. And yes, I must admit that, finally, these things were all destined to slowly roll down the avenue for the enjoyment of the masses. I had to keep reminding myself of advice given to me by an artist: Try to diversify your experience with the materials and techniques and how you work with them and their possibilities as much as possible. So … that when you decide to make art, forget everything that you’ve learned. Because at that point, the media in which you need to put forth an idea will simply manifest itself. An example of Villejo’s work on parade floats

Gene: Well, you created a Saint Anthony sculpture for a friend that has turned out to be very mysterious.
Tony: I was commissioned by the Saint Anthony Catholic Church out in Spring Branch [to sculpt] Saint Anthony holding the baby Jesus. Everything turned out well, the dedication and all. By the way, I must admit that the whole process, from start to finish, was the most difficult project I had ever been involved with. Technically it was fine, but emotionally, it drained me … just the fact that it was to be a saint that was to be viewed by a serious Catholic community. Anyway, a year later, a good friend of a family member commissioned me to create another one, but in plaster, for his new home … Well, this guy is new to the neighborhood. Keep in mind that every single home in the area has its own six-foot privacy fence. A couple of weeks later, his neighbor informs him that, the night before, he had seen this really bright light radiating from his patio. That happens to be where this statue is situated. I put it there, and I do know for a fact that all this guy has on his patio is a simple 60-watt bulb. Anyway, the neighbor tells him this happened. My friend thinks this is unusual, but who knows? A few days later, same scenario, from the other neighbor.

Gene: Really?
Tony: Another incident happened during a very hard downpour. This time it’s the neighbor directly behind his home … Then he has a friend visiting for a few days and, at around 3 a.m., his home alarm goes off. He rushes out of his bedroom and lo and behold, through the blinds there is this really bright light or aura radiating from you know what. The good thing is that he woke his guest from the other bedroom and had him sit there and experience this with him. The only reason they didn’t go out [there] was that they had to wait for the response from the alarm people to figure out what to do in the way of a police response. Anyway, he tells me they both sat there and continued to watch this happen for about 10 minutes.

Gene: Really?
Tony: Prior to the last incident, my friend was at work and had received a call from his home alarm monitoring people informing him that something at the window where the statue sits had, for lack of a better explanation, caused some type of pressure on the glass to set off the alarm. They investigated it and came to no reasonable conclusion. Gene: Again, proving the power of art.
Tony: Moreover, this person has no reason to conjure up a fairy tale. He is the choir director for a church of which my brother is a member. Practically everything that I’ve delved into creatively, whether a commercial endeavor or otherwise, seemed to have some sort of a purpose in the whole mix. I attribute this way of thinking to several people. As far as my work is concerned, it sometimes takes a while for me to completely grasp, but it’s like Robert Gonzalez wrote: “Making art is a penetration into a spiritual culture. Not particularly an act of cultural-centric self-expression.”

Gene: I know Robert. That’s great, Tony. I love hearing about that. See, I told you, you’re interesting. That was good for me! Was it good for you?
Tony: It’s done wonders for me.

Gene: Want a cigarette? Now you get to ask me a question.
Tony: We’ve known each other for quite a number of years. At the very least 30. I’ve known of your work as an artist. I’ve always had a great respect for what you do. In these past years we’ve reconnected, and I now recall your intense attitudes about certain things. We’ve had conversations concerning some types of art that bother us both, yet you’re so deeply involved with the social and political movement of it all. So am I, but I do know that I simply don’t have the patience. I recall you telling someone that I was easygoing and that you were more of an “in-your-face” type. It would seem to me that the effort that you put forth, the letters, the people, the arts organizations, all of it — that you would get very frustrated. But you don’t. So my question to you is: What drives you to do it?

Gene: Oh, my reasons change every year for why I want to be involved in the arts community as an artist and an activist. At first, I was just impressed by creative people and wanted to be one and have a good time. As I understood the art world better, I realized that being a creative person is important to every aspect of life. I enjoyed getting to the bottom of the art world. Where were the problems and who was solving them? There is always some new corner of the art world that gets my attention. When I got to the realization that God is an artist — because it says at the beginning of the Bible: “God created the Heavens and the Earth,” I just had the biggest laugh. Because then I “knew” whose side God was on. It just made perfect sense. Art! It’s a religion! My mission is to get all these MFA artists politically involved and organized. However, that is like herding cats. I am so afraid that San Antonio is missing its opportunities. That is what’s behind Political Art Month. Artists should be involved and engaged in correcting the world’s problems, and not standing around worrying about conceptual art while the world falls apart. To me the Declaration of Independence is the real beginning of conceptual art anyway. Thanks for joining me on the Chartreuse Couch.

An exhibition of Tony Villejo’s paintings are on view 11am-3pm daily through Fri, Oct. 7 at Radius Center (106 Auditorium Circle).

The San Antonio chapter of the Human Rights Campaign announced it will present restaurateur Dawn Lafreeda with the Equality Award...