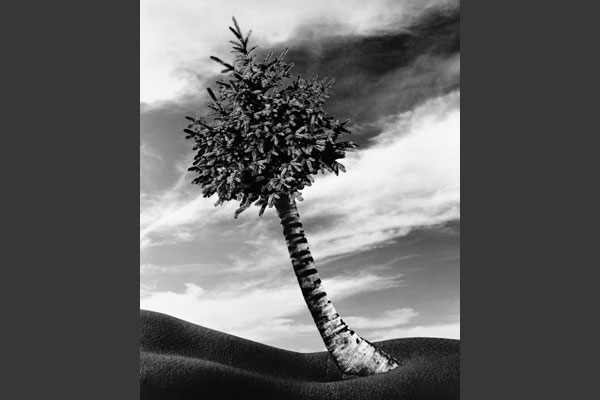 The Linda Pace Foundation’s newest exhibition, which opens on March 10, will feature 25 monochromatic works by some today’s most influential contemporary female artists.

“As the title implies, the exhibition addresses the concept of ownership—both literally and figuratively—and the notion of ‘reclaiming’ what’s ours, from our lands and governments to our physical bodies and basic human rights,” the Foundation’s announcement for the exhibition explains. “Central to each of the works on view are themes of nature, identity and the female form, often times as a depiction of non-traditional feminine ideals.” One of the artists featured in the show is Mexican-American photographer Laura Aguilar who is lesbian. In an interview with The New Yorker last November, Aguilar said she belonged to a a “hidden subculture within another subculture, a marginalized community within another marginalized community,” adding that her work was an exploration of “this precarious double identity.” One striking work in the show, Mes voeux sous filets, is by celebrated contemporary French installation artist Annette Messager. The sculptural installation features photographs of individual body parts hung under a layer of netting. “Inspired by religious relics historically hung from church ceilings, Messager employs these symbols as a commentary on blurred gender binaries and the widespread objectification of the physical form,” according to the show’s announcement. Reclaimed also features a single channel video installation by Lorraine O’Grady. In Landscape (Western Hemisphere) viewers hear chirping birds, insects and other woodland sounds and the sight of what appears to be billowing grass waving in the wind. However, the visual is actually the flowing curls of O’Grady’s hair.

According to the show’s announcement, Reclaimed is a “departure from the Foundation’s typical spotlight on experimental and new media works, this unexpected selection provides insight into the depth and variedness of the permanent collection.”

In Lawsuit, Texas Couple Claims They Were Illegally Turned Down as Foster Parents Because They Are Lesbians

By Sydney Greene, Texas Tribune This story has been updated to include a comment from the Texas Conference of Catholic...