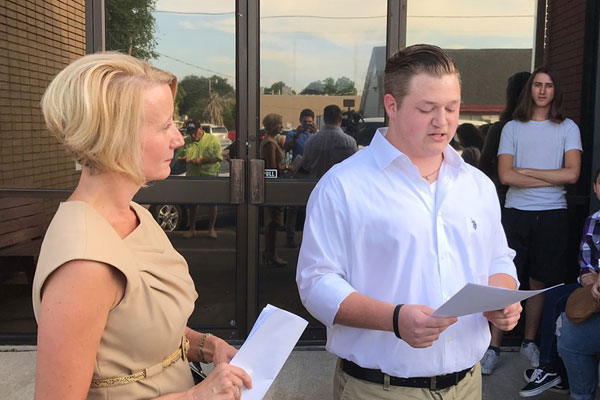 Cross Coburn with his attorney Jill Pierce at a press conference on June 25. (Video capture via KBMT)

The effort to recall the councilman began last spring after nude photos of Coburn, which were found on the gay hookup app Grindr, were sent in an anonymous letter to local media and members of the City Council.

The petition was initiated by William L. Howlett, a resident of Groves who told the press that Coburn had “publicly demonstrated actions unbecoming a public official.”

The mayor of Groves City, Brad Bailey, said public servants “should be held to a higher standard.” The mayor added that while the photos were not illegal, citizens had the right to recall Coburn.

The recall petition, which contained over 900 signatures from local registered voters, was certified on June 25 by attorney James Black.

The options for Coburn are to either resign or face the recall election in November. “I have said before that I will not resign,” he reiterated in a press conference in front of City Hall on the day the petition was filed.

Coburn was elected after he ran unopposed for the council’s Ward 1 seat last November. At the time of his election, he was a student at Lamar State College in Port Arthur where he was pursuing a theater arts degree.

“I felt like I was being harassed; discriminated against because I’m a young gay man on City Council,” Coburn told KFDM-TV after the photos were first revealed. “That is my personal life, and no one should know about it. I’m sorry if anyone took it the wrong way, but it’s nothing more complex than this is my private life.”

“His only request is that in November, when this issue is on the ballot — if it does end up on the ballot — that people judge him and vote for him based on the job he’s done as a city councilperson,” Coburn’s attorney, Jill Pierce, said in a statement to the press.

Originally published in the San Antonio Current. You don’t have to look far to see Frida Kahlo’s signature brows stitched...