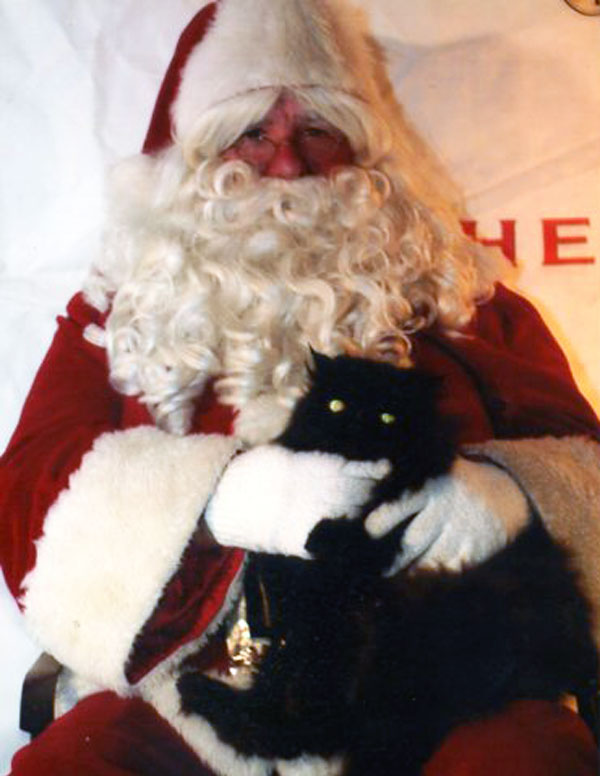 Samson Price, a black Persian, poses with Santa Claus at last year's Pet Night With Santa at Luther's Cafe. This year's event is on December 8. (Photos by Sam Sanchez)

Owners of cats and dogs can get their pet’s picture taken with Santa Claus and help a local charity buy toys for needy kids at a fundraiser sponsored by Luther’s Cafe on December 8.

Pet Night With Santa is a yearly event which is organized by Scott Ross, Luther’s marketing director. Photos with Santa are $5 or a new unwrapped toy which will be donated to Operation Blue Santa.

The Blue Santa program originated in 1976 when a group of SA policemen, led by Officer Tom Preston, purchased and distributed toys to needy children.

Over the years, the Blue Santa program, which is now sponsored by San Antonio Police Officers Association, has grown to become a city-wide effort which serves over 8,000 needy families with not only toys but food, clothing and monetary donations.

Ross says the Luther’s event offers a great way for the LGBT community to lend a hand to the Blue Santa effort while having a great night out with their furry companions.

Who doesn’t love a good old-fashioned dance-a-thon? Put on your dancing boots and head over to LezRideSA’s first ever Jotos Y...