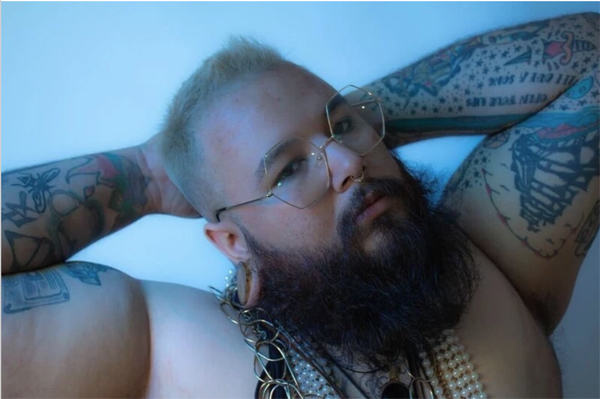 San Antonio queer rapper Chris Conde (them, they) has released a new video from their latest album, Engulfed In The Marvellous Decay.

Conde, who now lives in Austin, was previously the music editor for the San Antonio Current and a regular performer at local clubs.

The new video of the single, “Summertime Heat,” premiered nationally on September 8. In honor of the occasion, Conde will be performing with Fake Four Inc label mates Dark Time Sunshine and Ceschi on September 18 at the The Little Darlin’ in Austin.

According to a press release, “The video and concert come on the heels of a flood of glowing local, national and international press for the album, including landing at #12 on Bandcamp, an ‘album of the year’ declaration from Ghettoblaster Magazine, 9 out of 10 stars (a rarity) from the French magazine Sun Burns Out and a description as ‘revelatory’ by Austin Monthly.” The video was directed by Richard Whymark in collaboration with Conde and El Dusty.

The video is a celebration of Mexican-American and LGBTQ culture and features cameos from Jeff Smith of Hickoids, Caleb De Casper, Audrey Campbell and Thomas Valles of Pleasure Venom, and Austin Chronicle music editor/musician, Kevin Curtin in an unforgettable role as an angry Westlake pool owner. Throughout his career, Conde’s music has reflected a proud and passionate attitude toward being queer. In a 2018 article in the Current they wrote that Pride is a “celebration of life and liberation of a false belief system told to us that there’s something wrong with us.

“Coming out is one of the first steps toward emotional and spiritual liberation, and unfortunately people continue to use religious books out of context to classify and separate groups of people.”

“Shorty after the Pulse night club shooting in 2016, I wrote a song called ‘Growing Up Gay.’ I felt like a lot of folks didn’t really understand pride or the amount of work and effort it takes for a person to come out as LGBTQ.”

In announcing their new album and video, Conde says they’re focused on another challenge for the community.

“This album deals with so much about what we’re all still going through in this pandemic. So, I’m just excited to get on stage and safely gather in the backyard at The Little Darlin’ to share these songs live with my friends and family. It’s been a crazy year and a half and we need art, music and performances now more than ever.”

Stand-up comedian Paula Poundstone isn’t letting the global pandemic keep her down – for the most part, at least. Over...