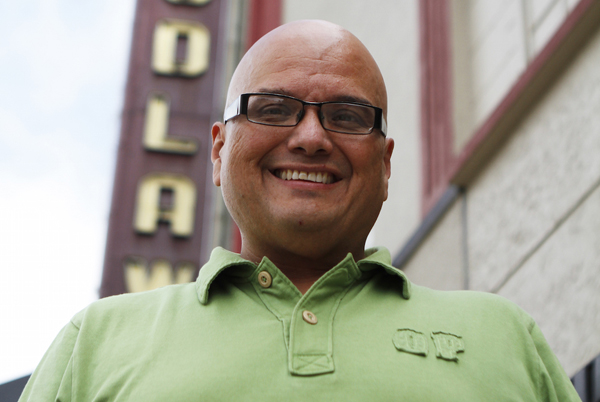 Greg Hinojosa at the Woodlawn Theatre. (Photo by Alexei Wood)

Hinojosa was a graduate of Holmes High School in San Antonio and attended Southeastern Oklahoma State University where he majored in theatre and speech. He is survived by Daniel Acosta, his husband of 23 years.

San Antonio theatergoers knew Hinojosa best for the numerous characters he portrayed on local stages. During the holidays, theater critics applauded his portrayal of Scrooge in the musical, “A Christmas Carol,” which he also directed at what was then the San Pedro Playhouse.

Greg Hinojosa as a chatty biddy in “Red, White and Tuna,” as Ebeneezer Scrooge in “A Christmas Carol,” and as Mrs. Forrest, a psychotic suburban housewife in “Psycho Beach Party.” (Courtesy photos)

Professionally, he worked at regional theaters across the U.S. including Santa Fe Stages, The Springer Opera House, The Magik Children’s Theatre of San Antonio and The Repertory Theatre of America.

Hinojosa was active in the theatrical arts for over three decades. He received numerous Alamo Theatre Arts Awards for his work as an actor and director in “I Am My Own Wife,” “Little Shop of Horrors,” “Santos y Santos,” “Once Upon a Mattress,” “Of Mice and Men,” “Chicago,” “Scrooge, the Musical” and “Christmas in Blueville.”

Even though he was known primarily as a director and actor, Hinojosa was also a set and costume designer and make-up artist. For a time, he served as a board member of the San Antonio Theater Coalition.

In 2011 he garnered notoriety as the director of “Corpus Christi,” playwright Terrance McNally’s drama that portrays Jesus as a gay man. The backlash against the play by local Christian extremists got national attention, prompting a series of letters of encouragement from McNally to Hinojosa.

In 2012, Hinojosa became the artistic director of the Woodlawn Theater, the iconic Deco District showplace on Fredericksburg Road. At the time he told QSanAntonio, “This is a real artistic opportunity for me. It’s a chance to showcase what I’ve been passionate about my whole life.”

Hinojosa led the Woodlawn through a period during which its audiences grew and expanded thanks in part to the presentation of well-produced Broadway musicals, many of which he directed. Under his stewardship, the Woodlawn saw growth in its acting school for children which mounts productions regularly on the theater’s main stage.

As a result of his involvement with the Woodlawn, Out In SA magazine named Hinojosa as one of the “10 to Watch” among the most influential people in the LGBTQ community.

In December of 2015, Hinojosa announced he was leaving the Woodlawn. In a Facebook posting at the time he wrote, “Change is always difficult, but change is necessary in order for us to have human revolution. So with that in mind, I have accepted another position in town and will announce more about that in the new year.”

Most recently, he was a special needs instructor at Howsman Elementary School. For over 20 years, Hinojosa and Acosta led a group of volunteers in the staging of “Fiesta Frenzy” an annual drag and variety show that would donate all box office proceeds to local charities.

In a Facebook post shortly before his passing, Hinojosa wrote, “Daniel and I are overwhelmed with emotions. The calls, the texts and the support of family and friends has been amazing. Live life to your fullest, live, love and laugh. It’s been a hell of a ride and look forward to my next journey.”

No information about memorial services is available at this time.

San Antonio attorney Michael J. Ritter has been nominated to run for president of the Texas Young Lawyers Association. TYLA...