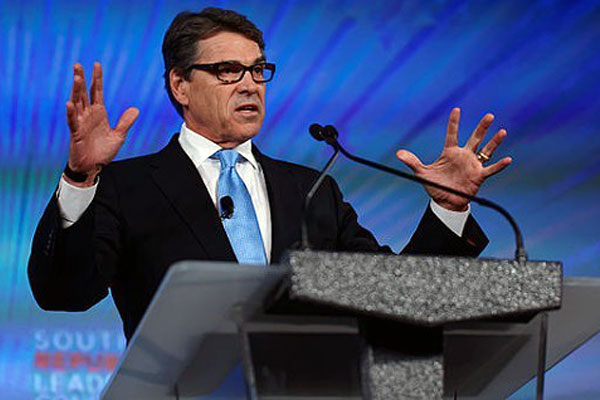 Sure, former Texas governor Rick Perry is now charged with overseeing the nation’s nuclear arsenal as head of an agency he once proposed eliminating. But guv goodhair still has plenty of time to weigh in on the things that really matter in his home state.

Like Texas A&M University recently electing, for the first time ever, an openly gay student body president, something Perry in an op-ed Wednesday called “a mockery of due process and transparency.”

Here’s the “controversy” Perry decided was worth taking time away from his new job: new A&M student body president Bobby Brooks only won after the leading candidate in the race was disqualified amid allegations of voter intimidation and failure to report some campaign expenditures. The university’s student government association’s “judicial court” later cleared that candidate of voter intimidation but upheld the latter charge and disqualified his votes — meaning A&M’s first gay student body president won on a technicality.

If the whole thing sounds petty, that’s probably because it’s a freaking student body election. But to Perry, a former Aggie yell leader, it was a very big deal — sign, in fact, that the election was “stolen” in the name of diversity.

As Perry wrote in his op-ed published by the Houston Chronicle Wednesday: “Now, Brooks’ presidency is being treated as a victory for ‘diversity.’ It is difficult to escape the perception that this quest for ‘diversity’ is the real reason the election outcome was overturned. Does the principle of ‘diversity’ override and supersede all other values of our Aggie Honor Code?”

Perry’s new gig has a pretty steep learning curve, especially when you consider that two physicists (one of whom had a Nobel Prize) occupied the post before him, Perry’s only got a bachelor’s of animal science from A&M (not a star student, turns out) and he reportedly didn’t even know the job was mostly about nukes before he took it. You’d think he must have much bigger things to worry about right now than student body politics at his alma mater.

Or maybe, after enough time in Texas politics, words like “gay” and “election fraud” and “diversity” are just triggering for the dude. Maybe, as Rice University political guru Mark Jones told the Chronicle, “He must be really upset about it.”

New Board and Logo Unveiled at LGBT Chamber Luncheon

The San Antonio LGBT Chamber of Commerce unveiled new branding and a newly-elected executive board at its annual awards luncheon...