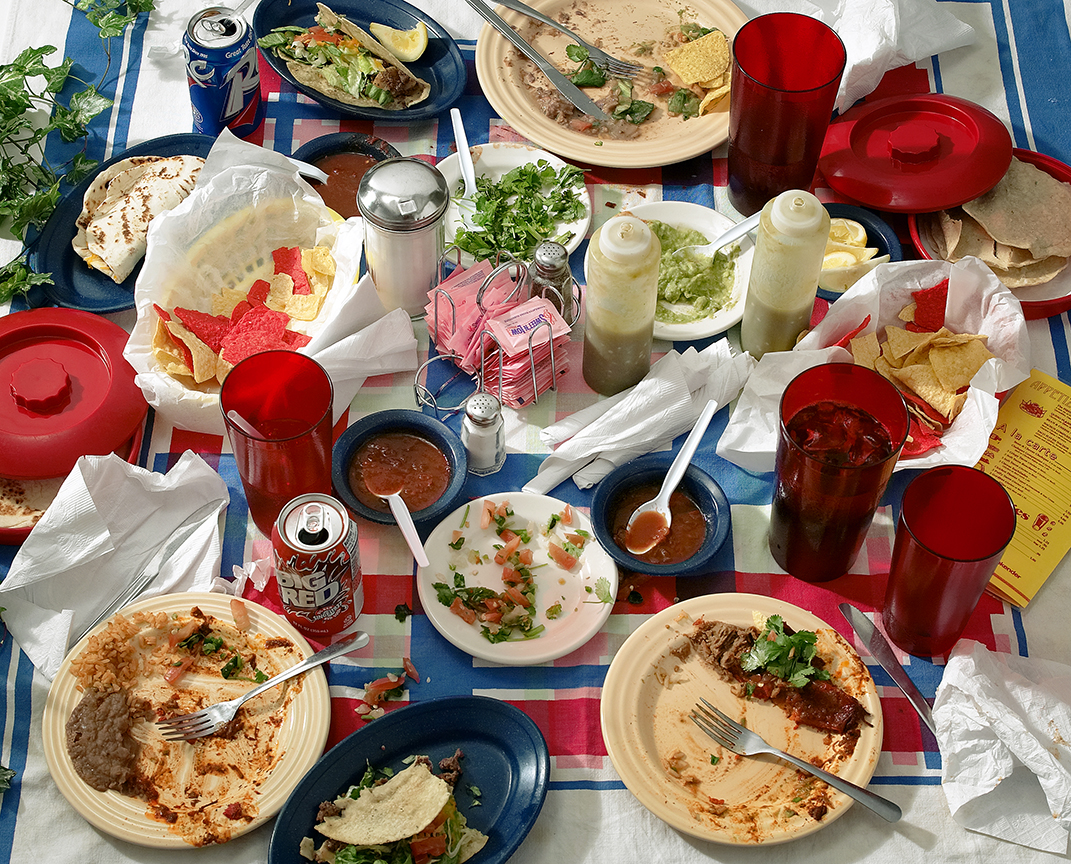 A lot has changed in San Antonio in the seven years since Chuck Ramirez died.

There are working artists, young ones and transplants from elsewhere, who never knew him. To his extended group of close friends, acquaintances, a still-tight micro-community of Southtown artists (for whom the rise of Artpace and Sala Diaz, the expansion of Blue Star and the legacy of Botánica Infinito were seminal), that seems unimaginable. But his passing, like anybody’s, marked the end of an era for which nostalgia isn’t particularly useful. If you haven’t seen the McNay’s Chuck Ramirez career retrospective, “All This and Heaven Too” (on view through January 14) or “Chuck in Context” at Ruiz-Healy Art on view through October 14), go. Because truly, whether or not you were around for the period of his life and celebrity, the work itself (picture large-scale, micro-detailed, blazingly lit and colorful photographs of, say, a broom, a shopping bag, or a wilting bouquet) is very useful. Each one is an object lesson in joy earned from sorrow, substance informing surface; and rather than seeing his images singly or reproduced digitally, to stand there among many iterations, evolutions, admissions and even jokes, it’s like the San Antonio camp-pop version of standing in the Rothko Chapel.

And here’s the simplified bio: Chuck Ramirez was a San Antonio-born artist, who went to Jefferson High School, studied art and graphic design at San Antonio College, and worked as a graphic designer at H-E-B and San Antonio Magazine (before its purchase and transformation into an anodyne glossy). He left the 9-to-5 in order to launch himself into the contemporary art world. As a gay, HIV-positive Latino man, Ramirez, alongside artists Alejandro Díaz and Franco Mondini Ruiz, spearheaded a queer-lensed, rasquache-informed new wave of humor-laced, graphically arresting art. He quickly became one of the city’s most loved artists and celebrated personalities, and a deeply involved and welcoming member of the creative community, before dying an untimely death seven years ago at the age of 48 as the result of a bicycle accident. Much has been and should be made of the theme of mortality running through Ramirez’s work. Having been diagnosed with HIV in 1990, he labored under the sentence until the late ’90s, during which time protease inhibitors and other post-AZT cocktail treatments began lengthening the lives of the positive. But even beyond this lived memento mori, Ramirez struggled with the tensions between disposability and value, in his life and in larger human culture.

A significant number of his works include food, an informal “celebration suite” rarely all seen together, of photographs depicting breakfast tacos, chocolate and coconut candy, cuts of meat. These subjects lived in the real world, where he did. A little-documented but beautiful piece of his was included in “Phantom Sightings,” a LACMA-curated group show of Chicano art that traveled to San Antonio for a stint at the bygone Museo Alameda. It was an elaborate dinner tablescape equipped with a crockpot of queso, quesadillas de maíz, vases of cilantro and bowls of neon-green homemade salsa. These delights were lit in part by two vintage lamps, punctuated with little brown bags of Styrofoam chicharrones. It was a site-specific and visceral work, one of the exhibition’s strongest, and as evanescent as the Alameda proved to be. And it was only slightly more elaborate than the shindigs he threw at his house and in the homes of others. He liked to give little gifts, little cacti, little jars of colored water. If you find yourself slightly puzzled by this ongoing “season of Chuck,” the mass of his lifetime should help. If it doesn’t, that’s okay too. Chuck Ramirez was no saint; he could be deeply bitchy, highly critical, and harbored attention-related beefs of his own. He probably would’ve gleefully listened to yours. And he might have even talked you out of some of them.

And lest you dismiss him as an in-crowd guy, though he enjoyed and was conscious of status, he was no hipster. He liked fashionable things, beautiful things and chic happenings, but he also grew up nerdy in San Antonio in the ’70s and ’80s, and bore some of the uncool taste-markers to prove it. He loved sci-fi and fantasy, played the trombone in high school and followed Renaissance fairs. He loved the prog-rock band Rush. He could be spotted smoking a cigarette in his truck with all the windows down, singing at full volume along to Boston’s “More Than a Feeling.” None of this was ironic. Nor was his title of Tía Chuck. He gave it to himself while helping plan the wedding of his great friends Ethel Shipton and Nate Cassie (the latter of whom stars in one of Ramirez’s video installations at the McNay). Shipton’s mother having passed, Ramirez nominated himself as bridal preparer in her absence. It stuck.

For this feature, I thought about combining funny party anecdotes about him from his many friends, but there are far too many to include here. If you search for him on social media, Facebook in particular, you can find a kind of real-time ofrenda, with many friends having tagged him in funny stories. But as an apotheosis of what he means as a queer San Antonio icon, I thought I’d let Tía Chuck take the floor. The following anecdote is taken from a 2000 interview with his friends Anne Wallace and Wayne Dow, in conjunction with Blue Star Contemporary’s 15th anniversary show “Rites of Passage: Quineañeras, Debs & Other Queens.”

It originally appeared in a four-channel sound installation featuring artists talking about the rites of passage in their lives.

And another epiphany of my life came when I became aware that I was HIV-positive. That was back in ’90, so 10 years after the start of the big plague. I learned a lot about my family then, to come to them with this problem. My mom had always been the loving mom. She said, “I love you. I don’t agree with it, I don’t understand it, but I love you.” But when I talked to my dad, it was really, really a turning point in our relationship. He was always very distant … he couldn’t deal with the fact that I was gay, and then when I became HIV-positive … the feeling was still, well, you’re going to die. Since then, it’s not like that. It’s basically, take your medicines, and you really do live.

At first, his anger was there … I instantly reverted back to childhood, when I would do something wrong, and he would give me that look, and that reprimand, and here I was 30 years old, and I just became like a child again. He made my sister and his wife leave the room so we could have a man-to-man talk. And we had not communicated like that in years … so, all of a sudden, I was becoming like this child in my mind again, and how am I going to deal with this? He told me basically, “Chuck, you are already morally dead.” Because he thought that being queer was a sin and all that: “You are morally dead, so what difference does this make?” And I could see the tears. I could see the anxiety in his eyes — and knowing that he couldn’t possibly mean that. And everybody came back into the room, and I told him, “Well, this is what’s going to happen.” And he started with, “Where did I go wrong?”

And I said, “You can’t blame yourself. This was something from birth, basically. I’ve had these thoughts since I was old enough to think. This is my life.”

And he was telling me, well, you’ve sown your own seeds (or whatever the term is), it’s your own destiny and you’re going to have to live with it now … The most important point — because I’ve always had a problem with my dad — I’ve never really felt like he cared enough, or showed his affection enough. We were leaving that day; I said to my sister, we had better go, this is getting out of hand, let’s just go. And I pretty much thought that I would never talk to him again. When you get angry, everything is exaggerated.

They followed us out to the car, and my sister was driving; I got in the passenger seat, and the window was down, and he just grabbed my arm. And he told me, “Chuck, I can’t help you. I can’t help you with this.”

And that’s what he used to always do, he would always help me get out of this problem … if you hurt yourself, fathers always come to the rescue of their children. And he couldn’t do it anymore. It was like, I had really blown it … I have a disease that’s going to kill me, and he can’t save me like a father.

And then that’s when I realized that he really did love [me], and it hurt him. It was hard. He was Catholic, and he put all that Catholic shit on me, and was like, I can’t pull you out of this one.

But since then, our relationship has gotten so much better! It was a healing. We get along better than we ever have. I think he sees me as an adult, somebody who has conquered, is living with an illness that has the potential to kill you. He’s maybe proud of me, possibly, finally, at the end. I was able to forgive him for all that crap, all that baggage, and see him for the human that he is.

Allies United: Thank You for Being a Friend

Updated October 12, 2017. In our efforts to champion each aspect of the ever-broadening LGBTQIA* umbrella, we’ve trained our focus...