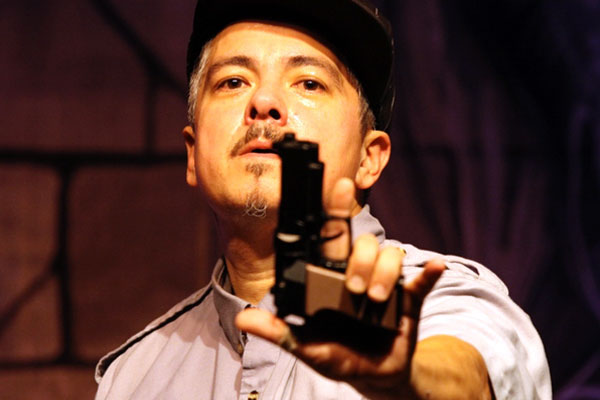 Times are tough in the town of La Esquinita. The city’s largest employer, the Thompson Tire Factory, has moved to China, leaving the city and its denizens with a financial crisis.

In a press release Gonzalez writes, “False idols of hope are the only source of relief and the citizens of this dilapidated town are left scavenging for what little remains.”

Into this backdrop, Gonzalez brings his narrator, Lencho, who tells the story of Daniel, an 18-year-old high school student on a crystal meth buzz. The eight other characters, like Sunshine, an upbeat old lady, and Wilo, a Viet Nam vet with challenges, are part of what the playwright calls a story of “love, forgiveness and ultimate redemption.” Through the 10 interconnecting characters, Gonzalez’s tale poses the questions, “When happens to a town when promises from big business are broken? What happens to the people left behind?”

“La Esquinta may be a one-man show but Gonzalez’s performance of each character is rich, full, and vibrant,” wrote Selene Santiago in Playwrighting in the City, an LA-based arts journal. “Gonzalez has this show in his skin. So quick and seamless that often the audience and I didn’t know whether to laugh or cry, and really, that’s what life is like, no?”

Gonzalez received his training at the London Academy for Performing Arts and the Circle in the Square Theatre School in New York City. He’s performed his work across the US including at the Kennedy Center in Washington, DC, El Teatro Campesino in San Juan Bautista, California and the prestigious Mark Taper Forum in Los Angeles.

His work in motion pictures includes performances in “Selena,” “The Master,” and the Benjamin Bratt film, “La Mission.”

Workshop: Back to School Challenges for Trans Kids

With the new school year just around the corner, the Esperanza Peace and Justice Center is hosting a workshop on...