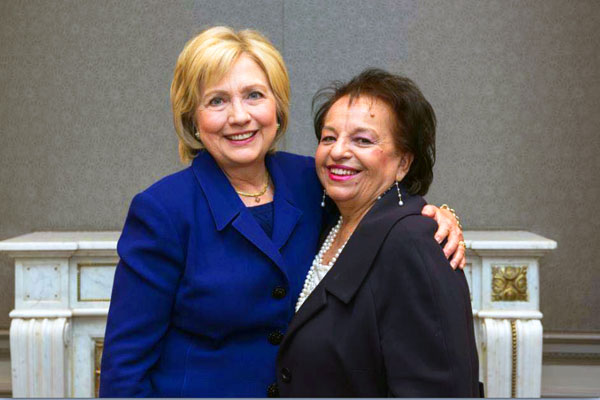 Choco Gonzalez Meza, who was a tireless activist for the Democratic Party and the lead of the Hillary Clinton presidential campaign in San Antonio, died on October 9, 2016 after a short battle with cancer.

“Choco Gonzalez Meza is a treasure, a tremendous resource for San Antonio, a mover-shaker and a dedicated organizer for women, Latinos and an ally to the LGBT community,” local attorney Maria Salazar wrote in a Facebook post after it was learned Meza was seriously ill.

Shortly after the announcement of Meza’s passing, Hillary Clinton tweeted, “Saddened by the passing of Choco Meza, a historic figure in Texas politics & beloved friend on our team. My prayers are with her family.”

Born in the Mexican province of Coahuila, Meza came to Texas in the 1950’s with her family at the age of three. She is survived by her husband of over 40 years Daniel S. Meza, their two children, Danny Meza and Ivalis Meza-Gonzalez, and her extended family and countless friends. Meza’s roots in community service go back to her days at St. Mary’s University where she and Rosie Castro helped Dr. Charles Cotrell, then head of the college’s Political Science department, draft the plan creating 10 single-member City Council districts which was adopted in 1977.

In 1992, Meza served under HUD Secretary Henry G. Cisneros as deputy assistant secretary for Intergovernmental Relations and was the agency’s liaison to the Bill Clinton White House.

In 2011, she was appointed by President Barack Obama to the Commission on Presidential Scholars. That same year, party members elected her chairwoman of the Bexar County Democratic party, replacing Dan Ramos, the former chair who was ousted after making homophobic comments and for his constant infighting with party leaders. Choco Meza was campaign manager for City Councilwoman Shirley Gonzales and went on to become her chief of staff. (Photo: Facebook)

Most recently, Meza was campaign manager for Shirley Gonzales’ two successful runs for City Council District 5 and served as the councilwoman’s chief of staff. She took time off from that job to head-up the local Clinton campaign.

In January, Meza was interviewed by the San Antonio Express-News on the occasion of a fundraising visit by Hillary Clinton to San Antonio. At the time, Meza said she had known the Clintons since the mid-70’s. She recalled Hillary Clinton spent time in San Antonio as a young woman working to boost voter registration at the Mirasol Courts and some of the poorer sections of town. “[Hillary] comes as someone who has worked and lived here with us, someone who has enjoyed long-term friendships with many, many people in San Antonio,” said Meza.

Meza appeared in the PBS documentary, “Willie Velasquez: Your Vote is Your Voice,” which aired on October 3.

In March, she was featured in a report in the Washington Post titled, “A Nation, Divided.” In the article, writers David Maraniss and Robert Samuels declare her one of the “abuelas” of “Tex-Mex, Texas,” citing her achievements from immigrant to college graduate, successful career-woman and the mother of two attorneys.

“When she was asked what it meant to be an American, she said: ‘Just look at my family. That is an American success story.’”

Out at Sea: Gay & Lesbian Cruises Pull Out All the Stops

Where are all the non-gendered LGBTQ cruises? Lost at sea? A recent web search returned mostly male-only and female-only results;...