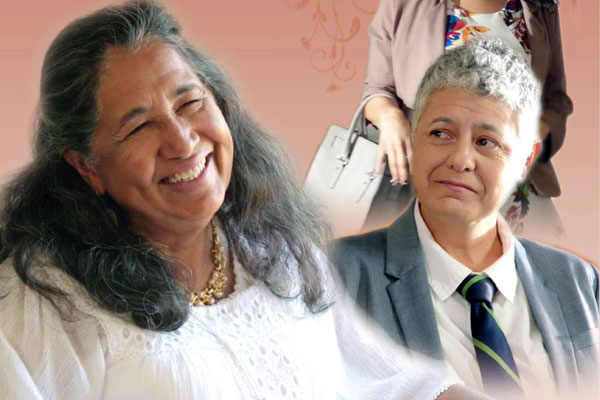 Anthony, who was born on San Antonio’s West Side and now lives and works in the San Francisco Bay area, will unveil Amigas with Benefits, which will be available for viewing online from July 17 to 28. The film is produced by Anthony’s AdeRisa Productions and is presented by Latino Public Broadcasting.

The plot of Amigas with Benefits, which Anthony wrote and directed, unfolds in a nursing home in Southern California where the wedding of two older lesbians is interrupted by one of the women’s daughter who opposes the union.

“I knew my protagonist, Lupita, was going to be a Latina lesbian elder who had been living in the closet almost all of her life,” Anthony said in an interview with PBS. “But living a lie has deep repercussions, and the story touches upon this. Even though Lupita’s daughter is written as the foil, and we had fun portraying her as a pseudo telenovela-esque character, her adult daughter is ultimately the consequence of Lupita’s closeted lesbianism over many decades.”

Anthony’s career has been marked by her prolific work as a playwright noted for her one-woman shows, among them Requiem for Queer Amor, Bruising for Besos, and Mastering Sex and Tortillas.

Anthony transitioned into filmmaking in 2012 when she and her wife, Marisa Becerra, released their first short film, Forgiving Heart. That same year, Anthony wrote the screenplay for Your Dead to Me which won an Imagen Award. Adelina Anthony and Carolyn Zeller in “Bruising for Besos,” which was screened on February 25 at Cine Festival.

In 2014, Anthony participated in the Sundance Intensive Writers Workshop and directed her first feature, Bruising for Besos, which is based on her 2003 one-woman show. The film premiered last year at Frameline in San Francisco. It was screened in San Antonio last February during Cine Festival.

In her interview with PBS, Anthony discusses her approach to storytelling. “As a Xicana lesbian writer I’m always asking myself, ‘What kind of queer stories have I not seen on screen or on stage?’ . . . if you look at mainstream LGBTQ and mainstream Latino/a stories, it leaves writers like myself with lots of room to explore. But the story challenge isn’t just about putting brown bodies where white and heterosexual bodies have historically occupied literary, theatrical or cinematic space — for me, the challenge is to tell a story we think we know in an altogether unique way.”

The PBS Online Film Festival will be available starting on July 17 via PBS digital platforms, including PBS.org, YouTube and PBS social media channels. The films will also be available via the PBS app on iOS, Android, Apple TV, Roku and FireTV devices. Viewers are encouraged to watch, vote and share their favorite film at this link.

Local gay businessman Chris Forbrich has been elected chairman of the Bexar County SMWBE Program Advisory Committee, a group that...