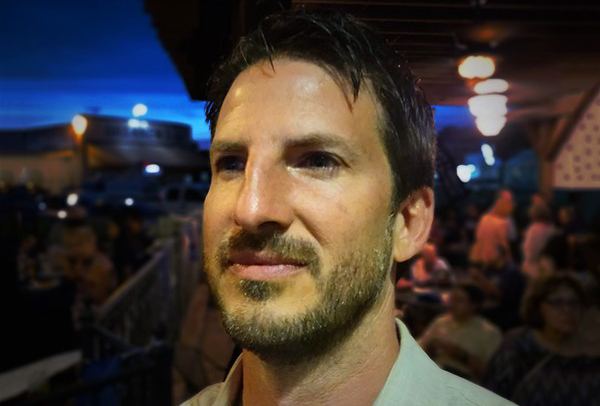 When District 1 council candidate Mario Kelly Bravo greets me through my computer screen for a Zoom call, a colorful art piece on the wall behind him captures my attention.

“My parents bought that in Mexico,” he explains. “I have a lot of stuff from Mexico here.”

Like his appreciation for art, Bravo’s verve for community organizing also runs in his blood. His maternal great-grandfather organized other East Coast immigrants to stand up to the mafia, who bullied them into paying protection money.

His maternal grandmother was a World War II soldier who served behind enemy lines, operating a safehouse that helped transport Romani, Jews and LGBTQ+ people out of the Nazi-occupied Netherlands.

“She carried cyanide around her neck in case they were to capture her. That way, she could just commit suicide and they wouldn’t get any information out of her.”

Bravo says that family history of community organizing, along with his passion for energy efficiency, put him on the trajectory to challenge District 1 Councilman Roberto Treviño in the May 1 municipal election.

Indeed, Bravo was raised by parents with similarly aligned principles.

“My mom was the neighborhood association president, and she would volunteer us to do stuff all the time,” he recalls. Among other things, his assigned tasks included building the playscape at the neighborhood park and keeping the greenspace mowed.

“And my parents raised everybody in the community,” Bravo adds. “All the kids who only had a single parent or had a dysfunctional home called my mom and dad ‘Mom’ and ‘Papa.’”

After graduating college, Bravo met a civil rights attorney who mentored him on the political processes needed to improve his community. Armed with those lessons, Bravo managed a campaign for a district judge in Laredo, and over the next two decades, he worked on several political campaigns, including his own.

In 2018, Bravo ran for Bexar County commissioner, challenging the late Paul Elizondo for his long-held Precinct 2 seat. The first-time candidate garnered 25% of the vote in the Democratic primary. Though it wasn’t enough to advance to the runoff, he says he did learn how to better communicate with voters.

“I have a lot of policy experience, but it’s important to make sure that you really listen to the community and that you’re bringing forward their ideas,” he says. “I love running for office, because I get out and have these meaningful conversations about what people care about and how we can move forward as a community.”

Bravo’s activism has also raised local awareness on key issues. For example, a few years ago, he played a part in stopping a proposed increase in campaign contribution limits at City Hall.

“I advocated — and I would even say I tried to whip votes — to prevent that from passing,” he says. “Giving more influence to people with deep pockets who can profit off decisions made at City Hall is not the direction we need to go in.”

I ask Bravo, a project manager for the Environmental Defense Fund and a climate and air-quality guru, what he wants San Antonians to know about energy efficiency.

“[That] Texas is dead last in the nation for energy efficiency,” he replies. “The best thing we can do is stop wasting energy. Weatherizing your house and having more energy-efficient appliances can make a huge difference.”

A former board member for the voter-mobilization group MOVE Texas, Bravo also thinks there should be fewer obstacles to voting.

“The fact that you have to register 30 days before the election? There’s no reason for that,” he says. “I think we have restrictions in place that are the modern-day version of the poll tax.”

Right now, Bravo is focusing his energy on prevailing over the five other candidates in the D1 race.

“I’m running because I think we need new leadership at City Hall that works with the community,” he says. “San Antonio’s stronger when we listen to the community and include them in our decision making.”

I ask Bravo what the biggest misconception is that people have about him.
“That I’m a radical,” he says after a long pause. “Truly what I am is a reformer — but I’m a practical reformer.”

A second fallacy, he adds, is that he’s anti-business.

“[I’m] absolutely pro-business [and] pro-workforce development,” he says. “We have a post-pandemic economic recovery that we’re going to go through. Once we’ve stabilized going forward, I want us to incentivize businesses that are going to make us economically competitive in the global economy. I want us to do it in an efficient and an effective way, and I want to make sure that we do it in a way that we bring everybody along.”

When it comes to the rolling blackouts that followed February’s winter storm, Bravo says there’s plenty of blame to go around, adding that the Electric Reliability Council of Texas (ERCOT) wasn’t prepared and that CPS Energy “didn’t do anything in response to that.”

Additionally, Bravo says city council has allowed CPS to self-govern and has not held the utility accountable to the community.

That’s why he led the fight to livestream CPS Energy board meetings and open them up to public comment.

“My approach has been working with the community, as opposed to when you look at Roberto’s approach, [which] is ‘Try and stop me.’” he says.

Bravo says he’s running for the same reason he ran in 2018: “I feel like there’s plenty of reform, plenty of improvements we can make at the local level.”

In an apparent act of vandalism, someone earlier this week shattered a window at downtown contemporary art complex Artpace. According...