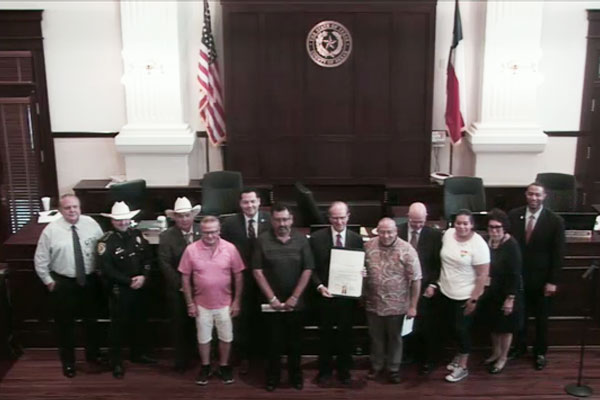 Board members from Pride San Antonio with members of the Bexar County Commissioners Court pose with Pride Proclamation on June 18. (Video captures via BexarCounty.org)

The proclamation designates June 29 as Pride Bigger Than Texas Day and recognizes Pride San Antonio’s service to the community and its efforts to promote the 50th anniversary of the Stonewall riots and the movement it created.

On the day before the June 18 meeting of the Commissioners Court, the San Antonio Family Assn. sent out an action alert to its members which said, “Bexar County Commissioners plan to condone & promote homosexuality as healthy & good as the Commissioners Court honors the ‘LGBTQ+’ community with a proclamation that states, essentially, that ‘We the people’ approve of its unhealthy and unnatural lifestyles.” 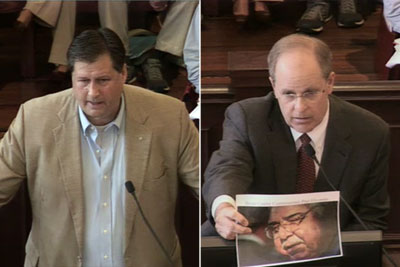 Two of the anti-LGBTQ speakers were Michael R. Knuffke and Patrick Von Dohlen, the founder and president of the San Antonio Family Assn. respectively.

During his comments, Knuffke pulled out a photo of now-deceased Commissioner Paul Elizondo because Elizondo successfully introduced a measure last year to update the county’s Equal Employment Opportunity policy to include protections for LGBT employees and job applicants..

One speaker, gay attorney Justin P. Nichols made his case by telling the Commissioners, “I am proud of who I am and and I am proud to have your support. 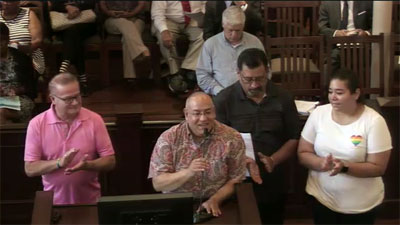 Members of the Pride San Antonio board of directors.

However, the arguments made by the anti-LGBT speakers, including that homosexuality is an evil abomination, that marriage is between one man and one woman, and that LGBTQ people spread disease, didn’t seem to faze the Commissioners.

Shortly after the public comments ended, the County Commissioner’s, County Commissioner Tommy Calvert read the proclamation, then Judge Nelson Wolff presented it to the board members of Pride San Antonio and posed for a group photo with them.

A new documentary about Arthur "Hap" Veltman and the San Antonio Country nightclub will have its premier on June 23...