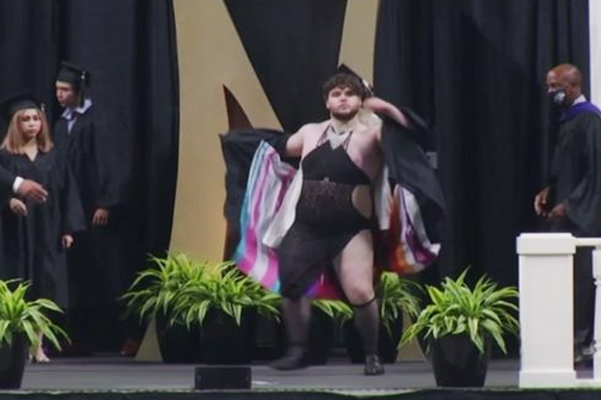 First, a Southwest Legacy High School grad recently landed in hot water for displaying a Mexican flag at her commencement, and now a Clark High School student is getting grief over a graduation unveiling that went viral. The complete video can be viewed at this link.

Northside ISD officials told news site MySA that they took disciplinary action against a bearded student who unzipped their graduation gown during Clark’s June 8 commencement ceremony to reveal a skimpy black dress with cut out sides. A transgender pride flag also appears to be sewn into the inside of the graduation robe.

The student, identified as Samuel Silverman Garcia in the clip, tosses confetti and blows kisses to the cheering crowd. As can be expected, the video — which has since racked up 40,000 Facebook views — subsequently shows school officials escorting the student offstage. “While we cannot discuss individual student discipline, administrative action was taken to address the disruption,” Northside spokesman Barry Perez told MySA. While Perez wouldn’t go into the specific action taken against the student, he said their diploma “remains with the campus.”

Not to be outdone, the self-appointed morality police of the San Antonio Family Association tweeted out the clip, calling it “repulsive evidence of a great degradation in our culture that is harmful for this young man and society.” Meanwhile, Northside’s Perez told MySA the district is disciplining the student because it wants commencement ceremonies to “honor and celebrate” its grads’ achievements.

“Disruptions detract from this celebratory environment,” he explained.

Anyone want to wager whether the faculty members who escorted Silverman Garcia off the stage told the new grad the stunt would go down on their permanent record? Or is that ominous threat specifically reserved for pre-commencement disciplinary sessions?

Texas bakery comes under fire for rainbow Pride Month cookies, but crowds step up to support it

When Lufkin, Texas bakery Confections posted to Facebook to spread a message of “More love, Less hate,” owners Dawn and...