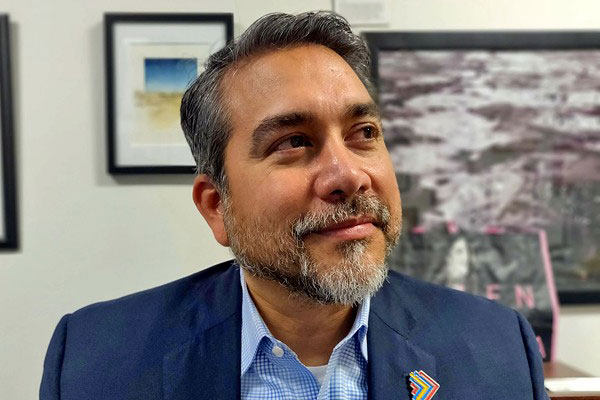 I’m sitting across from Roberto C. Treviño in his office, its walls full of art by local creators.

“You see, my office is full of art because I don’t have a window,” he says with a warm, raspy voice.

It was this love of art, in conjunction with his volunteerism and philanthropy, that led the McAllen native to win the District 1 appointment in December 2014, after predecessor Diego Bernal stepped down to run in a special election for a vacant seat in Texas House. Treviño was elected the following year and re-elected in 2017.

Growing up, Treviño always imagined what it would be like to be both an architect and a pilot. As District 1 councilman, he’s had an opportunity to find out, since he uses his deep understanding of the structural details of the city center while steering the direction of downtown’s future from his council seat.

On May 4, Treviño, now 48, will face his third election, this time in a field flush with opponents. He seems nonplussed. That may be because he senses that his unique qualifier as downtown’s citizen-architect sets him apart from the pack.

His manner, as he discusses sidewalks, lights and roofs seems more like the talk of an artist than a politician. The ebb and flow of his intimate speaking style bring to mind past conversations with local creative luminaries like David Blancas, the visual artist, and Poet Laureate Octavio Quintanilla.

Treviño’s accomplishments have been hard to ignore.

In 2017, for example, he initiated the council vote that created the rainbow crosswalk at the intersection of North Main and Evergreen in the city’s gay nightlife district. The project made a befitting sequel to Bernal’s non-discrimination ordinance, a generational milestone for the city’s LGBTQ residents.

And with a #rainbowcrosswalk hashtag now widely shared on Instagram, Treviño’s legacy bears a cultural significance that will outlast his time in this office. It also makes him a hero among locals aware of his part in creating the landmark.

As we delve into a pool of McAllen memories, Treviño cancels his next appointment and tells me about the time he met his childhood idol, motorcycle-jumping stunt performer Evel Knievel.

When he was nine, Treviño and his best friend, Bobby, stumbled across the motorcycle-encircled travel trailer of Knievel, who was in town for an appearance. As they approached, Knievel’s son Robbie, who was about the same age as Treviño, rose from a hammock and struck up a conversation.

“[Then] Evel Knievel shows up,” Treviño says with widened eyes. “Like the man, right?”

Knievel asked his son who the newcomers were.

Knievel nodded with amusement. “Oh, really? So, we’re all Roberts here, huh?”
Treviño pauses. “And I said to him, ‘Wait a minute… I thought your name was Evel.’” After a hearty laugh, Knievel explained that Evel was his nickname and that his real name was Robert.

“And I was like, ‘Whaaat?’” Treviño recounts with youthful ardor. “I can’t believe my hero’s name is also my name!”

It was a “cool moment” for the books.

Treviño has become a bit of a star himself as the torch-bearer for a district he describes as “the heart of the city.” Our conversation circles back to his architectural experience, which he says allows him to view the quality-of-life needs of his constituency through a filter of practicality.

I ask what architecture has taught him about life.

“Architecture has taught me to see the world through many different perspectives,” he says. “That’s what architecture is about. It’s about people.”

Treviño says the best architects are the ones “who understood how we’re all connected.” He also maintains that “architecture can help drive a significant message about civilization [and] communities.”

In his case, Treviño says he carefully considers how future generations will remember the 1836 Battle of the Alamo as he works on improvements to the Alamo Plaza visitor experience.

When it comes to affordable housing, he asks me to momentarily take away the element of cost.

“What’s left? People just want a good roof over their head. A roof leak can become a serious issue, much like a homeless person who has a hygiene problem that’s not taken care of. It turns into a medical issue,” he adds, referring to the mobile shower truck he’s proposed that the city purchase to serve the homeless population.

At one point, he picks up on my perplexity over the inside-baseball details of architecture and smiles. “I can get very technical. That’s the beauty of architecture. You have to balance the esoteric ideals with the technical realities.”

I ask Treviño if he thinks he’s good at that.

“I think so. Balance is the difficult thing. It’s something that we need to remind ourselves of daily,” he says, adding that he admires people who can find balance in their personal lives. “The scale doesn’t matter. It’s about where you find your balance.”

Treviño seems to have fashioned a clear-eyed equilibrium between his two childhood aspirations. The architect knows that architecture requires balance. The pilot can see the connection between architecture and people.

The day-to-day actualization of this dream job seems to offer the councilman some unique insights — and, from the cheap seats, a political advantage.

Judy and Dennis Shepard, of the Matthew Shepard Foundation, will be in San Antonio on March 20 for an event...