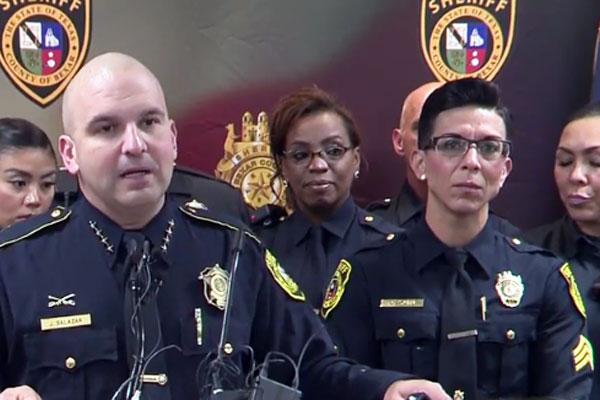 In August 2018, Bexar County Sheriff Javier Salazar announced the “Community and Internal Liaison Program,” with the goal of creating relationships with culturally-specific communities in the county. (Courtesy photo)

Bexar County Sheriff Javier Salazar will be the guest speaker at a luncheon sponsored by the San Antonio LGBT Chamber of Commerce on February 20 at Rosario’s Southtown.

According to the Chamber’s announcement, the event, dubbed, “Sound Off with Sheriff Salazar – LGBTQ+ and Allies Forum” will be an “opportunity to learn how the Bexar County Sheriff’s Office supports our LGBTQ+ community and engage with other like minded professionals and community members.”

Salazar was previously a police officer who worked as the spokesman for the San Antonio Police Department. He was elected sheriff in November 2016, beating one-term Republican incumbent Susan Pamerleau by 4000 votes.

During a December 2015 interview, Salazar was asked by Out In SA if he would appoint an LGBT liaison if elected. His answer was, “Absolutely. The SAPD has an LGBT liaison . . . I would like to create a team of officers that are liaisons to different segments of our population like the military, the African-American community, the Hispanic community and the LGBT community would definitely have a liaison.”

Salazar also said he supported LGBT sensitivity training for law enforcement cadets. “It’s necessary to teach cadets how to interact with the LGBT community because it’s a real population, it’s a sizable population, bigger than we even know,” he said.

That same year, the sheriff was one of two Grand Marshals for the Pride Bigger than Texas Parade. It was not the first time Salazar participated in the Pride parade. He and his wife marched in the event in 2016 and 2017.

San Antonio LGBT Chamber of Commerce, Sound Off with Sheriff Salazar – LGBTQ+ and Allies Forum, February 20 from 11:30 a.m. to 1 p.m. at Rosario’s Southtown, 910 S. Alamo St. Pre-registered admission is $10 for members and $15 for non-members. Admission at the door on the day of the event is $15 for members and $20 for non-members. Pre-register via [email protected].

Who Do You Want to Run Against Trump? Early Voting Starts February 18