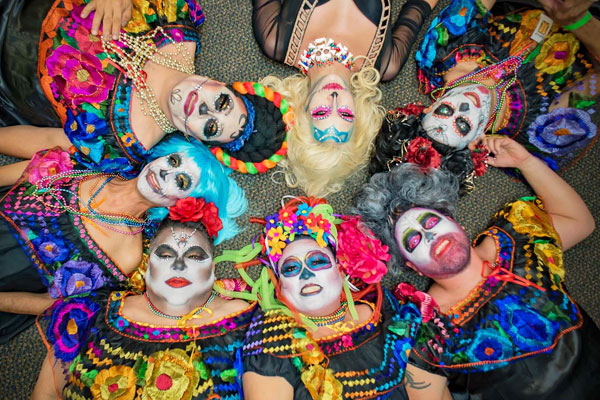 A short film abut a drag troupe founded in San Antonio 34 years ago by mainly Latino men will receive its premier on July 21 at Outfest in Los Angeles. 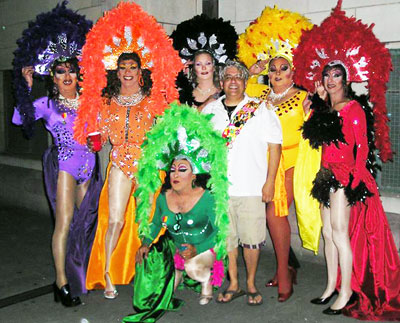 The Pointless Sisters (which is also the name of the film) were originally started to raise money and awareness in the fight against HIV/AIDS. “We came together to help fill that need,” an essay on the group’s Facebook page explains. “Through the years many of our sisters have lost their battle but we continue.”

These days, the Pointless Sisters are known for their folkloric performances at the annual Fiesta Cornyation in dance spoofs that are amusing yet amazing for the quality and skill of the dancing.

David Sims shooting footage for his Cornyation film at the King Anchovy Coming Out Party. (Photo by Sam Sanchez)

The Pointless Sisters film is produced and directed by local independent filmmaker David Sims of Astrobleme Films & Davis Sims Media. Sims, who was born in the UK, has been making films since he was 11 years old. He attended the London Film School and worked in Johannesburg developing programming and documentaries for the South African Broadcasting Corporation.

In 2018, Sims produced a 20-minute documentary about Fiesta Cornyation and recently began work on a full length version.

The Pointless Sisters will be screened at the festival with other short films under the banner,”Shorts: I’m Still Here.”

“Outfest is LA’s oldest film festival!” Sims said in a Facebook post. “We couldn’t be prouder! And our biggest heartfelt thank you to the Pointless Sisters and Fiesta Cornyation!”

“We must ensure all Americans are treated equally no matter who they are or who they love," the Democratic presidential...