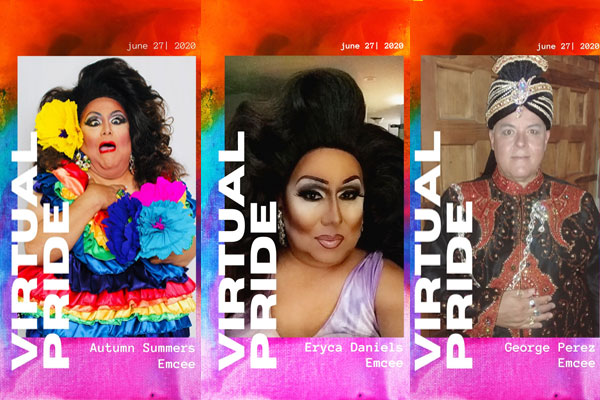 Last May, organizers of the Pride Bigger Than Texas Festival and Parade announced that both events would be replaced by a virtual celebration to be aired on the Pride San Antonio Facebook page and YouTube channel on Saturday, June 27.

“In an effort to maximize the safety and well-being of our community and to continue to control the spread of COVID-19 we have opted to move Pride Bigger Than Texas 2020 to a virtual platform,” James Poindexter, board secretary of Pride San Antonio, told Out In SA at the time.

This year’s theme is “Celebrate PRIDE365.” Emcees for the broadcast are Autumn Summers, Eryca Daniels and George Perez.

The event will feature entertainers, community panel discussions, a wedding ceremony, championship wrestling, a virtual Pride parade and much more.

For kids who tune in, local actor and director, Greg Hinojosa, will perform a Cat in the Hat Experience and former Miss San Antonio Pride, Ira Descent, will host a Drag Queen Story Time.

Some of the entertainment will originate live from private watch parties at Luther’s Cafe and 800 Live.

There will also be Pride Proclamations from city and county officials; a pandemic preparedness video; a Black Lives Matter panel discussion led by Aamori S. Olujimi; a SCOTUS panel discussion; a feature about the San Antonio Zoo during the pandemic; and a backgrounder about the Main Avenue Rainbow Crosswalk, including a live cleaning of the intersection by H2O Blasters.

The last hour of the broadcast will feature a Virtual Pride Parade featuring presentations from local organizations and businesses.

The management of the Pegasus nightclub, which is located on the Main Avenue Strip, announced on Monday, June 22 that...