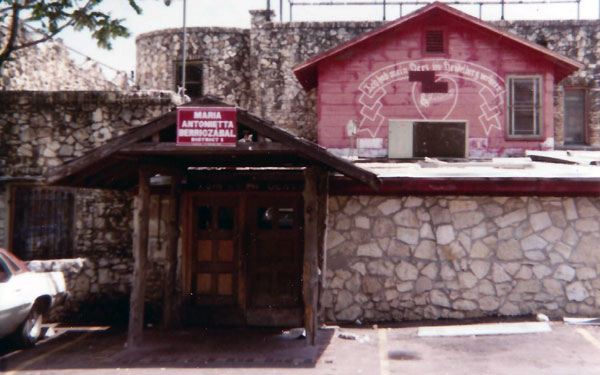 The San Antonio Country (above) was the subject of a hearing at Brooks AFB in 1973 after military police reported the club "catered to homosexuals" and should be made off-limits to military personnel. (Photo courtesy the Happy Foundation.)

The Jump-Start Performance Company on November 13 will present “Off Limits,” a staged reading of a play based on the transcript from a military hearing held at Brooks Air Force Base in June of 1973. The hearing was one of several convened to determine whether the San Antonio Country, a local gay bar at the time, should be ruled off-limits to military personnel because it “catered to homosexuals.”

The San Antonio Country opened just in time for Fiesta in 1973 at 1122 North St. Mary’s. It was in business until 1981 when the property was sold to Valero Energy Corporation, which went on to build their corporate headquarters on the site.

The Country was owned by attorney and entrepreneur Arthur “Hap” Veltman, an openly gay man who was a downtown real-estate developer, restaurant and nightlife impresario, arts advocate, and historical conservationist. After the Country closed, Veltman opened the Bonham Exchange which is still a popular nightclub today.

Veltman’s Country operated out of a one-story stone building situated along the San Antonio River. It had several large rooms including a disco and a game room with pool tables. For a time, Veltman also owned a motel next door to the bar, the Rio Lado, that offered the Country’s patrons a place to take their one-night stands.

At the time the Country opened, military police and SAPD used to make visits to the city’s gay bars mostly to intimidate patrons, who are described in the transcript as “suspected homosexuals.”

The military police were particularly interested in identifying gay soldiers and airmen who would be arrested and eventually drummed out of the service.

The transcript from the military’s hearing is the primary source material for the reading at Jump-Start. Gene Elder, archivist for the Happy Foundation and one-time manager of the Country, recalls Veltman, who died in 1988, saved the transcripts in hopes that one day they would be made into a play.

During the hearings, military police officers were questioned about visits they made to the Country. Sometimes, the testimony given by these witnesses bordered on the ridiculous.

In one instance, a military policeman is asked how he could be sure that patrons who were embracing on a couch and dressed as women were indeed men. The witness replied:

“Number one the tone of voice; their build, and on one occasion at the San Antonio Country, at the proper placement of penis on the body, there was a stiffness; and of the fondling on the couch, there was definitely an erection; and I feel, definitely, that this one particular individual was definitely a male, sir.”

Elder says that in December 1973, San Antonio police raided the Country after a military policeman accused a patron of pushing him and then called the SAPD for backup. “It was one of most crowded nights of the holiday season, ” says Elder. “There were 15 police cars and a paddy wagon.”

The story of the hearings, the subsequent raid on the Country and the presentation of Fairies Fiasco – a response to the raid performed by the employees of the bar – are all chronicled in Elder’s book, Murder by Collage with Found Object.

Elder told Out in SA that at some point the hearings stopped and the visits by military police ended without much explanation. The San Antonio Country was never put on the off-limits list.

Corbin said she is adding a backstory, drawn from Elder’s book, which will set the scene for the enactment of the hearing’s transcript. She emphasized this is an exploratory effort being mounted with an eye to possibly presenting a fully-staged production in the future.

Not going to lie, I have been abnormally excited about checking out the Sporting District ever since I heard of...