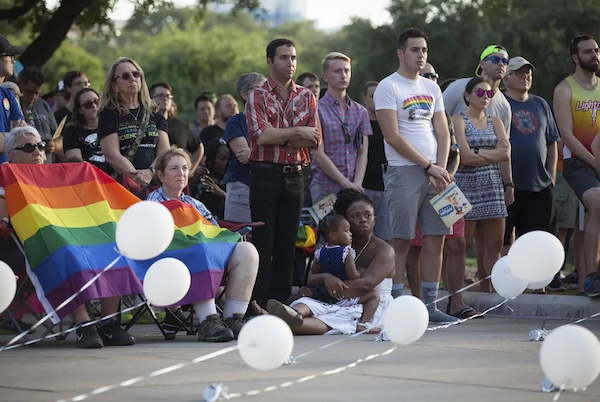 Activists and members of Austin's LGBTQ community gathered in 2017 on the steps of the Texas Capitol to celebrate the anniversary of the 1969 Stonewall riots. (Photo:Austin Price for The Texas Tribune)

Democratic state senators want the webpage reinstated. The resources were removed after Don Huffines, a Republican gubernatorial candidate, criticized their inclusion on a state website.

The Texas Department of Family and Protective Services webpage, which provides information to children in the foster care system, included information about a suicide prevention hotline, LGBTQ legal services, and questions about defining gender and sexual identity.

The Houston Chronicle first reported on the internal agency correspondence. According to communications obtained by The Texas Tribune, in the hours after Huffines’ video went up, DFPS employees discussed the possibility of removing the webpage or changing its content.

Huffines, a staunch conservative, is challenging Abbott from the right in next year’s GOP primary. Abbott’s office has not responded to a request for comment on the matter. The governor has power to appoint the DFPS commissioner and the agency’s nine-member council.

In an email to DFPS spokesperson Patrick Crimmins on Aug. 31, DFPS media specialist Marissa Gonzales wrote that Huffines’ video was “starting to blow up on Twitter,” linking to his video and the webpage in question. The page was populated with information from the Texas Youth Connection, a DFPS division that provides “local and national resources to help youth transition into adulthood.”

“Darrell – please note we may need to take that page down, or somehow revise content,” Crimmins wrote.

In response, Azar said the Texas Youth Connection had content for LGBTQ youth “for as long as I can remember” and that content was provided by staff from the agency’s Preparation of Adult Living Program. Azar alerted another colleague that something may need to be done on “short notice.”

The next day, Sept. 1, agency staffers discussed language for the webpage saying its content was being reviewed. The page is currently disabled and includes a message that says it is undergoing “a comprehensive review of its content.” Last week, Crimmins said the review of the website was “still ongoing.” He did not answer questions as to what prompted the website to be taken down and how long the review will last.

In a statement, Huffines said he had followed through on his commitment to get the webpage taken down.

“We aren’t surprised that state employees who are loyal to Greg Abbott had to scramble after we called their perverse actions out,” Huffines said in a statement. “I promised Texans I would get rid of that website, and I kept that promise.”

Ricardo Martinez, CEO of Equality Texas, an organization that promotes equality for LGBTQ Texans, condemned the decision to take down the information.

“State agencies know that LGBTQ+ kids are overrepresented in foster care and they know they face truly staggering discrimination and abuse,” Martinez said in a statement. “The state is responsible for these kids’ lives, yet it actively took away a resource for them when they are in crisis. What’s worse, this was done at the start of Suicide Prevention and Awareness Month.”

According to a 2021 survey from the Trevor Project, a national organization that focuses on LGBTQ youth suicide prevention and crisis intervention, about 42% of LGBTQ youth “seriously considered attempting suicide in the past year.”

On Tuesday, all 13 of Texas’ Democratic state senators sent a letter to Abbott, Lt. Gov. Dan Patrick, House Speaker Dade Phelan and DFPS Commissioner Jamie Masters, urging them to reinstate the Texas Youth Connection web page “to make certain all youth, especially those in the LGBTQ+ community” have access to important resources.

“As leaders of our state, we must do more to protect our most vulnerable populations, including ensuring life-saving resources such as crisis lines and legal help are easy to access,” the senators wrote.

In early August, Abbott directed DFPS to look into whether providing gender-confirmation surgeries for transgender children would constitute child abuse. Such care for kids largely does not consist of surgeries such as orchiectomies, hysterectomies and mastectomies, according to medical experts. DFPS replied to Abbott’s requests by stating that such surgeries could be classified as abuse, although it’s not clear what weight and impact the decision carries.

In each of the four legislative sessions this year, legislation targeting transgender youth has been a top priority for Republican lawmakers. During the third special session, legislation prohibiting transgender youth from playing on sports teams that correspond with their gender identity has passed in the Senate and has passed out of committee in the House. Lawmakers have also introduced legislation this special session that would restrict physicians from administering gender-affirming care to children.

A House committee approved the bill despite emotional testimony from parents of transgender Texas children. This is the fourth legislative...