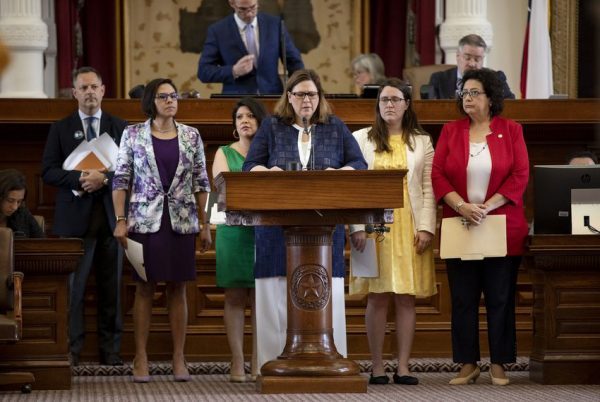 What started as a sweeping religious refusals bill has been significantly watered down as it moves through the Texas Legislature. But LGBTQ advocates still fiercely oppose it, saying it perpetuates hateful rhetoric.

Over the tearful opposition of the Legislature’s first-ever LGBTQ Caucus and several failed attempts at a procedural block, the Texas House passed a religious liberty bill Monday that LGBTQ advocates fear would license discrimination against their communities.

When the lower chamber first considered the bill just over a week ago, the LGBTQ Caucus torpedoed it with a procedural move. This time, an attempt to do the same failed, as did emotional exhortations from the five women who make up the caucus.

After two hours of debate, Senate Bill 1978 — which prohibits government entities from punishing individuals or organizations for their “membership in, affiliation with, or contribution … to a religious organization” — passed on a nearly party-line preliminary vote, 79-62. If the House grants formal approval and the Senate agrees to a change made on the lower chamber’s floor Monday, the bill will head to the governor.

“This bill is going to pass; let’s face it,” state Rep. Celia Israel, D-Austin, said from the front of the chamber minutes before her colleagues cast their votes. “It’s been cloaked in religious freedom, but the genesis, the nexus of this bill, is in hatred.”

When the bill was first filed, it contained sweeping religious refusals language that had the potential to gut the few existing protections for gay communities, hailing from a national sweep of anti-LGBTQ model legislation. As it’s made its way through the Legislature, the bill has been progressively stripped of its most controversial provisions, leaving a version that largely codifies existing legal protections: freedom of religion and freedom of association.

On Monday, House sponsor Rep. Matt Krause, R-Fort Worth, weakened the measure further, removing a provision that would have empowered the Texas attorney general to bring lawsuits against governmental entities accused of religious discrimination.

Krause said removing the provision was a show of “good faith,” as it had proved a “big sticking point” with opponents of the bill. Given the changes he described as efforts to compromise, Krause said he was surprised at the level of opposition to the measure.

But despite the revisions, the bill “perpetuates the rhetoric that leads to discrimination, to hate and ultimately bullying that leads to the consequence of people dying,” said state Rep. Mary González, D-Clint, who chairs the LGBTQ Caucus.

State Rep. Rafael Anchia, D-Dallas, who lobbed an unsuccessful point of order aimed at killing the bill, questioned Krause for some 30 minutes about how the bill might spark discrimination. And each member of the newly formed LGBTQ Caucus spoke against the bill, several of them emotionally, just before the House voted.

One member of the caucus, state Rep. Jessica González, D-Dallas, tried and failed to amend the bill with language that would have protected LGBTQ communities against discrimination from employers and the government. Currently, there is no state law that explicitly prohibits employers from firing workers based on their sexual orientation or gender identity, but some cities have codified those protections at the local level.

With emotional appeals looking unlikely to change minds, several LGBTQ Caucus members tried to persuade their colleagues to oppose the bill out of practicality — telling them, sometimes subtly and at times directly, that a vote for this bill could hurt their reelection chances in 2020.

“Members, this bill is here, being debated on the floor today, to make LGBTQ Texans feel less than, to make us feel attacked by our government,” said state Rep. Erin Zwiener, a Driftwood Democrat and freshman member of the LGBTQ Caucus. “We are living in history, members. Attitudes toward the LGBTQ community have changed rapidly over the past few decades. Young Texans in particular are overwhelmingly accepting of people of all sexual orientations and gender identities.”

Then she put a finer point on it. “You don’t need this vote,” Zwiener said.

Minutes later, the bill passed, with just one Republican, state Rep. Sarah Davis of Houston, voting against it. House Speaker Dennis Bonnen, who has said he supports the bill, did not cast a vote, as is customary.

The bill was revived in the Texas Senate last week after the LGBTQ Caucus effectively kept it from passing earlier this month.

Proponents have said it is necessary to reaffirm protections based on religion, citing incidents like the San Antonio City Council’s decision earlier this year to prohibit Chick-fil-A from opening in the city’s airport, with one council member citing the franchise’s “anti-LGBTQ behavior.” Some supporters of the bill labeled it the “Save Chick-fil-A Bill.” Krause said no business should be discriminated against based on its donations to religious organizations. Texas Attorney General Ken Paxton, who has long cast himself as a crusader for religious liberty, launched an investigation into the city’s actions.

Proponents and detractors acknowledged that the bill is likely to spark activity in the courts. Krause said that even without a provision empowering the attorney general to sue, individuals and organizations have a private cause of action under the bill — and can always look to groups like the First Liberty Institute, a law firm that crusades for religious liberty.

Opponents, meanwhile, emphasized that challenges to the law would mean major costs to the state.

“I have no doubt that if passed, SB 1978 will be fought in the courts at every level and at great expense to the taxpayers. To vote yes today is to put your signature on that invoice,” said state Rep. Julie Johnson, the Dallas Democrat who successfully sank the bill in its first appearance on the House floor earlier this month. “The underlying message remains the same — and that message poisons this state. It sends the message that Texas is not open and welcoming to all.”

San Antonio Congressman Will Hurd, a Republican, Voted in Favor of the Equality Act

On May 17, the Democratic-led House of Representatives passed the Equality Act, legislation that would outlaw LGBTQ discrimination, in a...