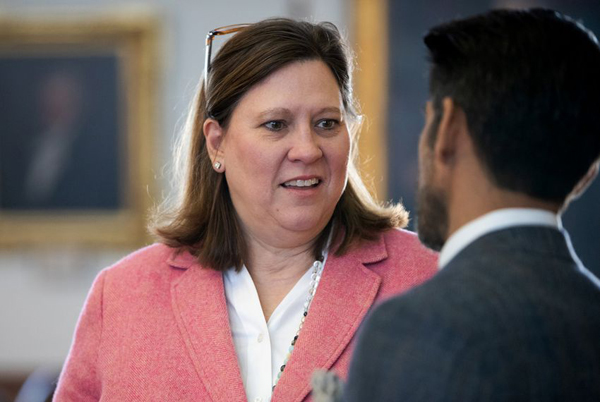 The LGBTQ Caucus, formed this year, notched a major victory Thursday evening, defeating a controversial measure as the Texas House raced toward a midnight deadline.

In their first major test, members of the Texas House’s LGBTQ Caucus helped muscle down a bill Thursday night that they characterized as an assault on gay rights and protections.

The five female lawmakers in the first-of-its-kind caucus used a parliamentary maneuver to delay and ultimately defeat House Bill 3172 by Fort Worth Republican Matt Krause, a measure he said would protect religious individuals and organizations from attacks by the government, and authorize the Texas attorney general to bring lawsuits in their defense.

With the Texas House racing toward a midnight deadline to consider its bills, state Rep. Julie Johnson, a Carrollton Democrat and longtime trial lawyer, rose with a “point of order” — a procedural technicality aimed at delaying or killing a bill. It was shot down. But she had a second point of order up her sleeve, and this one — to the surprise of many — stuck. While it’s possible Krause’s measure could get amended to another piece of legislation in the waning days of the legislative session, the clock has run out for this particular bill.

“The LGBTQ Caucus is in the House,” Johnson said in an interview on the House floor shortly after the bill was defeated. “We’re getting things done, and we’re here to stay.”

The defeat of Krause’s bill — which many LGBTQ advocates considered the most serious threat to reach the House floor this session — took less than an hour. And it marked a major shift in tone in a chamber that has been less conservative since the 2018 midterms. This session, pro-LGBTQ measures have made unprecedented progress in the Republican-majority Texas House, earning debate in committees for the first time — though few, if any, are expected to become law. The death of Krause’s bill was particularly striking given how close a highly controversial “bathroom bill” got to becoming law during the last legislative session.

“This commonsense religious freedom effort is far from over. We will not allow the clear will of the majority of Texans and a bipartisan majority of the Texas Legislature to be thwarted by a few,” said Jonathan Saenz, president of Texas Values Action.

By the time Krause’s bill reached the House floor, it had already been significantly watered down. That followed a late-night committee hearing that drew passionate opposition from the LGBTQ community. As presented Thursday, the bill would have prevented government entities from taking “adverse action” against individuals or organizations based on their “membership in, affiliation with, or contribution, donation, or other support provided to a religious organization” — protections that, in large part, are already enshrined in current law. Some groups, such as Texas Impact, a faith-based organization that opposes discriminatory measures, removed their opposition to the bill after its toughest language was stripped out.

But LGBTQ advocates and lawmakers still feared the bill could be amended or restored to its original version in a messy floor fight — particularly in the more socially conservative Texas Senate, which has already passed a so-called religious refusals law.

Krause said he would not have allowed additions from either chamber, and added he was disappointed that the House did not get the chance to debate his bill, especially after the revised measure stripped out so much of the language that caused advocates concern.

Krause’s bill would also have allowed the Texas attorney general to sue state employees or government entities to force them to comply with the measure. That provision would have laid the groundwork for Attorney General Ken Paxton to sue San Antonio, a city that has often drawn the ire — and the litigation power — of his office. Paxton launched an investigation into the City Council’s decision earlier this year to keep Chick-fil-A from opening a restaurant in the city’s airport. One council member, Robert Treviño, asked to block the franchise from a slate of contracts, saying he could not support a company with “a legacy of anti-LGBTQ behavior.”

Supporters of the Krause bill had lauded its potential to “#SaveChickFilA.” The interest group Texas Values — best known for leading the charge for the “bathroom bill” that dominated Capitol conversations in 2017 — had worked to drum up support for the Krause proposal at a “Save Chick-fil-A” advocacy day at the Capitol in April, an all-day affair that began with a lunchtime rally and ended in the early hours of the next morning in a committee hearing packed with witnesses.

Rev. Ilene Brenner Dunn, former pastor of Madison Square Presbyterian Church in San Antonio and an ally of the LGBTQ...