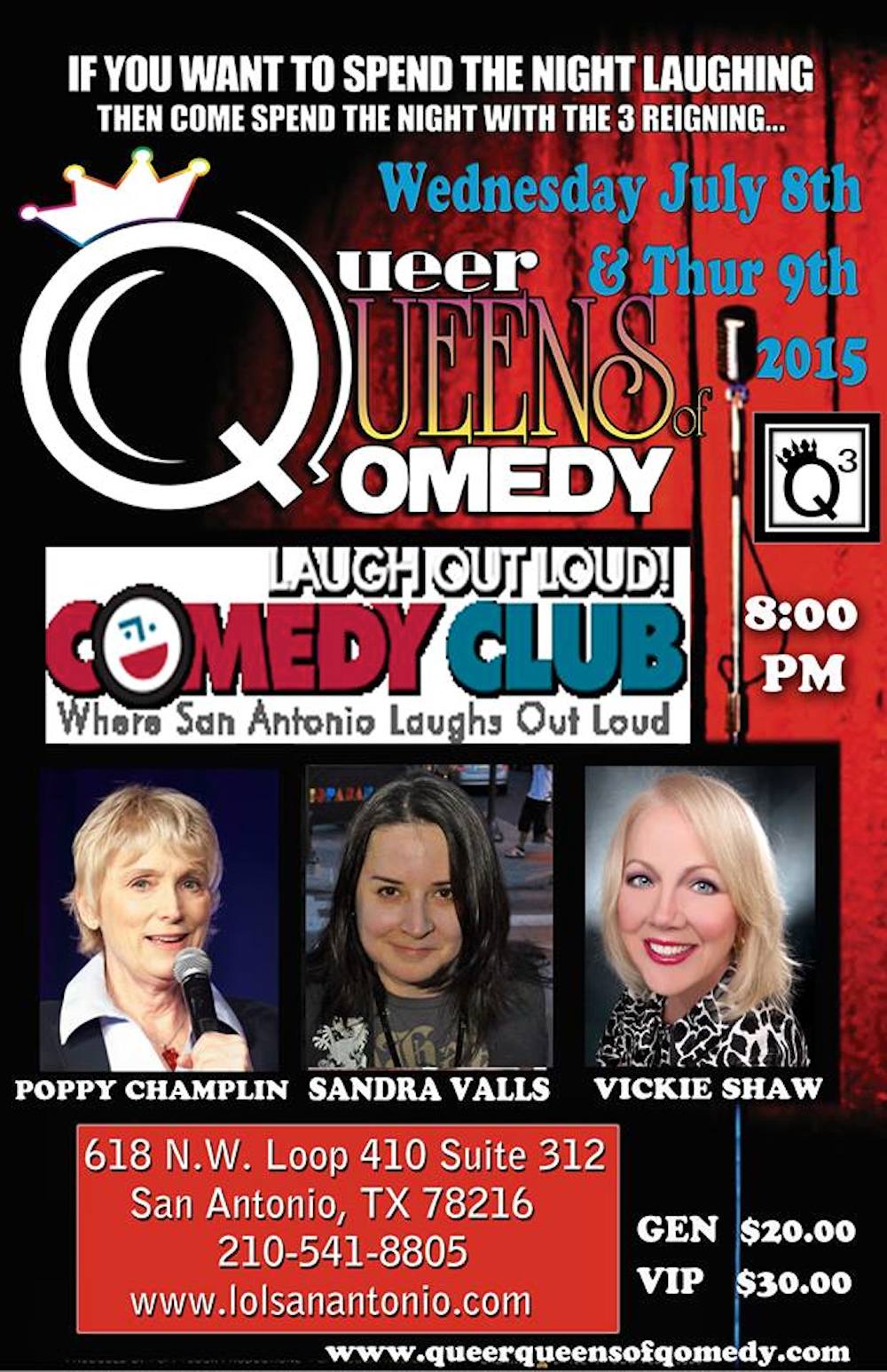 Pride may be over, but the LGBT community and its allies can rest assured that the focus on LGBT events isn’t over just yet: the Queer Queens of Comedy (Poppy Champlin, Vickie Shaw, and Sandra Valls) are gracing San Antonio with their presence this Wednesday and Thursday at the Laugh Out Loud Comedy Club.

It’s the first time the comedians have done a two-night show since the tour’s inception, but show producer Champlin is confident that the San Antonio audience will be welcoming. She says the crowd at the last San Antonio show was so great, she could’ve crowd surfed.

In addition to the first ever two-night show, it’s also the first time Champlin is featuring comedians who have toured the show before (she considers Shaw and Valls to be among the best to have taken part). But this tour is also special in that it marks ten years of queer female comedians in the spotlight. Champlin’s decision to start the Queer Queens of Comedy show ten years ago was strategic in two ways.

The first involves Champlin’s ambition with her comedy. When the show first started, she desired to sell out larger, theater style venues but didn’t have the recognizability that venue managers were looking for. ”My name wasn’t a recognizable name like some of the other lesbian comedians you might know, but I feel like I have as much to offer as they do as far as how much people laugh- cause people laugh hard at my stuff- so I asked a venue… ‘How bout I bring in two other lesbian comedians that I think are hysterically funny and we just pack a wallop as far as comedy goes and call ourselves the Queer Queens of Comedy?’” The show sold 450 tickets and has been touring ever since.

Champlin also started the tour to spotlight both the talent and journeys of queer female comedians. “I’ll tell ya, I think queer women are really funny. And I think it’s because we’ve had to work so hard to become comedians, because I think most of us had to start in the straight world and straight clubs and work our way up the ladder in that situation, and that is hard in itself cause first of all you’re a woman, and second of all you’re gay. So to stay in the game- like all of these women have stayed in the game for so long that their base of comedy is so full and rich. So we’re really good, that’s the thing, and we bring a great show to town.”

In light of recent events, it’s a good time for some queer comedy. But Champlin definitely feels that being gay is a political statement and it’s her goal to “make the politics of the whole thing funny.” She believes comedy “equalizes the playing field” and through it she aims to normalize topics that garner too much controversy, like being gay.

“I just can’t believe that it’s taken this long to become an equal citizen, but what it [comedy] does is it breaks down these barriers. It’s almost like being racist, so many people are racist and so many people are homophobic and racist in their homophobia, so what we’re doing by breaking down those barriers is starting to erase homophobia.”

Champlin is also featuring two local LGBT comedians: Crist Guzman on Wednesday and Jade Esteban Estrada on Thursday. She promises audience members are in for an “unbelievably fun- and political” show.

Tickets can be purchased online.

It may seem odd to some to have a wedding on the Fourth of July; it’s Independence Day after all...