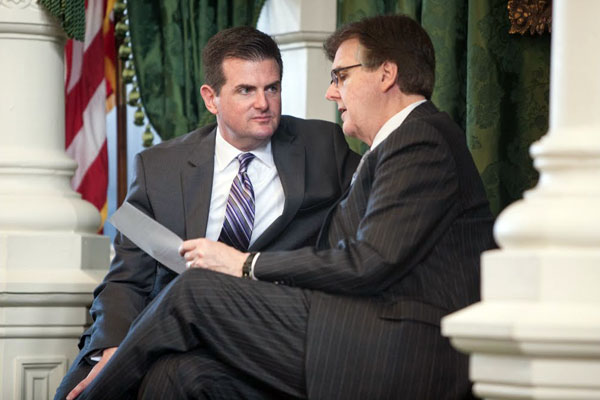 Three bills that prohibit cities from regulating how an employer distributes benefits, healthcare, and paid leave, and which also contain provisions that could threaten the enforcement of local nondiscrimination ordinances, are slated to be heard by the Texas House State Affairs Committee on Wednesday, May 1.

The three bills (SB 2485, SB 2486, and SB 2487), which were introduced by state Sen. Brandon Creighton (R-Conroe), have already passed the Senate. According to Equality Texas, the legislation was expedited by Lt. Gov. Dan Patrick who gave the order to strip out any language that protected NDO’s.

The content of the three bills comes directly from Creighton’s earlier bill, SB 15, which was criticized by cities, unions and LGBTQ groups who compared it to last session’s bathroom bill.

On its face, SB 15 would have prohibited cities from requiring that private companies offer paid sick leave and other benefits to their employees. It was prompted by ordinances passed in Austin and San Antonio that require paid sick leave. However, there was language in the bill which could have superseded local nondiscrimination ordinances.

In March, a coalition of companies including Apple, Dell, PepsiCo, Apple Amazon, Facebook, HP and PayPal reacted to SB 15 by sending a letter to Texas lawmakers saying, “We will continue to oppose any unnecessary, discriminatory, and divisive measures that would damage Texas’ reputation and create problems for our employees and their families. These include policies that explicitly or implicitly allow for the exclusion of LGBTQ people, or anyone else.”

As a result of the controversy, SB 15 was considered dead in the water, so instead Creighton created a “package of splintered legislation” which resulted in the multiple bills being reviewed by the House committee.

Equality Texas is asking its supporters to consider testifying against these bills at the hearings, which are scheduled for Wednesday, May 1 beginning at 8 a.m. at the Texas Capitol Room E2.014. Those who wish to testify can contact Equality Texas via email at [email protected].

Those who cannot appear in person can send letter of protest to legislators using this link.

The LGBTQ Victory Fund, the only national organization dedicated to "electing LGBTQ leaders to public office," has endorsed trans candidate,...