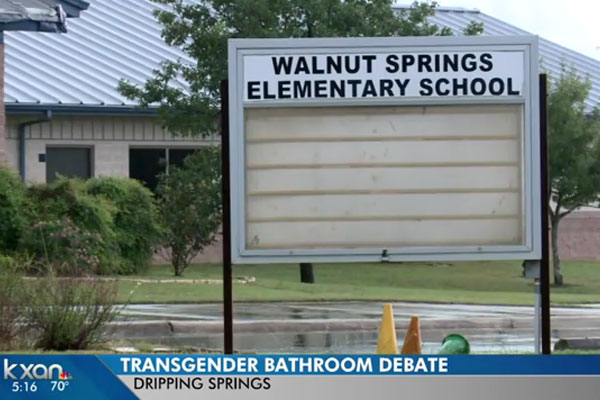 A controversy, which affected the school board election, erupted last fall when school district officials decided to let a third-grade trans girl use the girls' bathroom at Walnut Springs Elementary in Dripping Springs, Texas (Video capture via KXAN-TV)

The days leading up to the normally quiet school board election in Dripping Springs, Texas erupted into a heated battle over transgender bathroom use with one candidate saying he opposed trans students using the bathroom that matches their gender identity.

Three candidates were vying in the May 6 election for two seats on the Dripping Springs ISD board: Incumbents Ron Jones and Barbara Stroud; and first-time candidate Trey Powers. The district operates four elementary schools, two middle schools and one high school.

The controversy first began last fall when district officials decided to let a third-grade trans girl use the girls’ bathroom at Walnut Springs Elementary. Previous to that decision, the child had been forced to use a single stall bathroom. The district has no official policy on bathroom use and employs a case-by-case approach.

Powers, who has kids who attend Walnut Springs Elementary, said he disagreed with the school district’s decision. “My position is not based on a personal feeling regarding transgender individuals,” he told the Austin American-Statesman. “It’s based on my disagreement with a policy that makes an accommodation for one student at the sacrifice of many.”

Jones and Stroud both said they stood behind the school district’s decision. The Statesman reported that Jones felt that “regardless of where one stands on the issue, it will be decided by the state or courts, and he doesn’t think the district should use its limited resources to fight whatever the decision is.”

The topic of bathroom use became the dominant issue in the school board election and the discourse became extremely heated when Texas Values, an anti-LGBT Christian group, became involved.

According to a report on the Transgender Planet blog, Texas Values “orchestrated a media blitz fomenting hatred of the transgender child and anger at the school board.” In response, local advocates circulated a petition in support of the trans student which was signed by over 500 Dripping Springs citizens.

In the months leading up to the election, Texas Values president Jonathan Saenz said the district’s “reckless new policy to allow boys into girls’ bathrooms is an attack on parental rights and ignores the privacy and safety concerns for all children . . . We urge the school board to revoke this dangerous policy immediately for the sake of privacy and safety for all students.”

State Rep. Jason Isaac, a Republican who has two children who attend school in the district, spoke against the policy at a Texas Values press conference in front of district headquarters, saying he considered it a “safety issue.” (See video below.)

“Public school bathrooms and locker rooms should be safe spaces – not social experiments that leave children vulnerable without privacy or dignity,” Campbell said in a statement. “I encourage Dripping Springs ISD to support bathroom and locker room policies that reflect common sense, take every student’s safety into account, and give full consideration to the concerns of parents in the most transparent manner possible. Anything less is a disruption to the learning process and fails to serve the education needs of Texans.”

An article in the Dripping Springs Century-News reports, “. . . both Barbara Stroud and Ron Jones expressed thanks to their supporters and the community. Stroud said, ‘I am honored that the community has placed their trust in me to allow me to serve for an additional three year term on the board. I look forward to working with Dr. Gearing, Ron Jones and the rest of our dedicated board members . . .'”

Powers, who opposed the trans student’s use of the girls’ bathroom, was shut out in third place.

Opera San Antonio kicks off its next season on September 8 with a production of Giuseppe Verdi’s Shakespearean drama Macbeth. In...